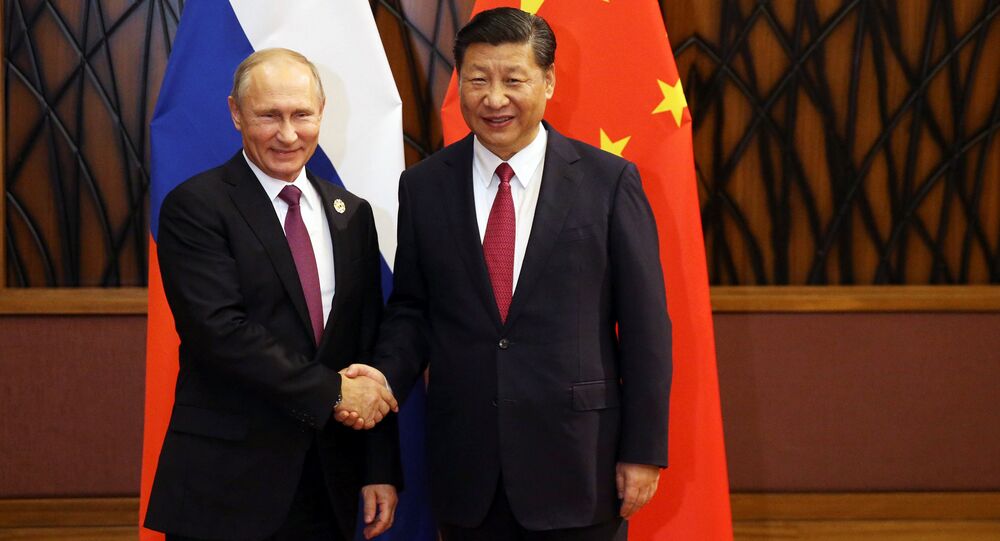 Russia, China to Look for New Areas of Cooperation - Putin

Russian President Vladimir Putin has held a meeting with Chinese counterpart Xi Jinping on the sidelines of the APEC summit.

DA NANG  (Sputnik) — Russian President Vladimir Putin has stated that Moscow and Beijing would look for new areas in which the two countries may cooperate.

"I want to point out that our efforts are not in vain. The turnover has increased by more than 35 percent. That is good news. You [Chinese President Xi Jinping] mentioned several big projects in various spheres. We will work hard on them… We will look for new spheres of cooperation, and I am sure that they will be found and [their potential will be] fulfilled," Putin said, adding that Russia's goal was to develop strategic cooperation with China.

He also congratulated Xi on his re-election as Chinese president at the October National Congress of the Communist Party of China.

© AP Photo / Mark Schiefelbein
Russia Rating Agency to Cooperate With Leading Chinese Research Firm
Xi, in turn, thanked Putin for his congratulations and focused his remarks on the successful implementation of a number of joint projects in various spheres, such as gas and aircraft construction, as well as coordination of Chinese efforts on the One Belt One Road initiative with the Eurasian Economic Union (EAEU).

The Chinese leader has also reaffirmed readiness to further develop relations with Russia.

Russia and China have been steadily intensifying their bilateral relations, which is reflected by a high level of trade, solidarity on a number of international issues and a series of mutual visits by high-ranking officials. The ties have been described by Moscow as being at their highest level in history.