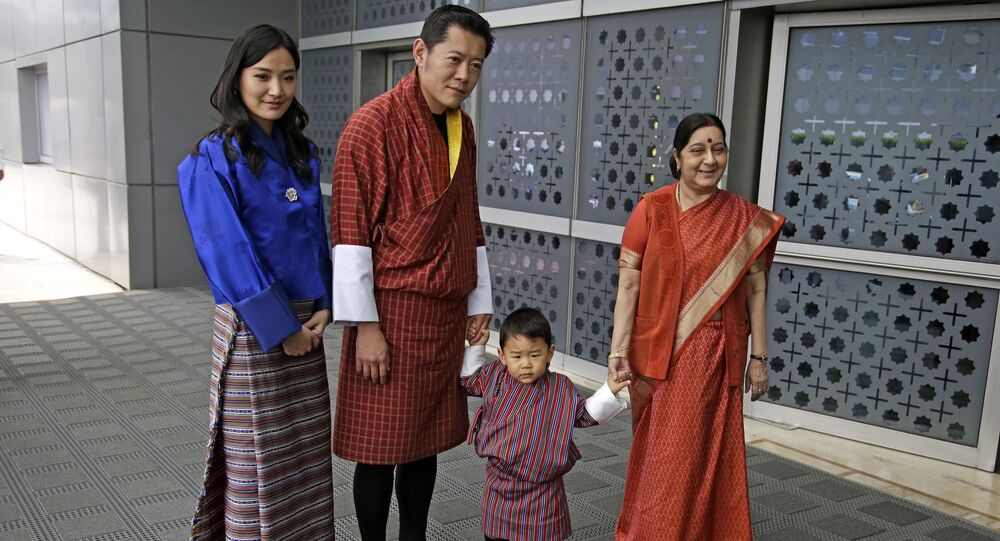 This is the first high-level visit from the Bhutanese side after the Doklam crisis involving India and Bhutan on one side and China on the other. The crisis had witnessed India and China locked in a bitter military standoff for over two months earlier this year.

NEW DELHI (Sputnik) — The King of Bhutan, Jigme Khesar Namgyel Wangchuck is currently on a four-day visit to India. He is accompanied by his wife, the Queen, Jetsun Pema Wangchuck and the Royal Prince.The Bhutanese King met with the President of India, Ram Nath Kovind and discussed issues of mutual interest. The mutual security concerns of the two countries were discussed with great priority.

"The President said that security concerns of India and Bhutan are indivisible and mutual. He conveyed deep appreciation for the King of Bhutan's personal involvement and guidance and the support provided by Bhutan in addressing the recent situation in the Doklam area. He added that the manner in which both India and Bhutan stood together to address the situation in the Doklam area is a clear testimony to our friendship," a statement issued by the President of India's office said.

"The King of Bhutan and the Prime Minister of India expressed satisfaction at the excellent state of bilateral relations and reaffirmed their commitment to advance these exemplary across diverse sectors of cooperation," a statement by India's Ministry of External Affairs read.

Experts are of the opinion that the recent build-up of Chinese troops in the Doklam area, despite the agreement between India and China to maintain status quo in the region, has been a matter of grave concern for India as well as Bhutan, therefore, the Bhutanese King's visit to New Delhi at this juncture holds great significance.

"Bhutan's support is key for India to counter Chinese influence in the region. Although, both India and China had agreed to maintain status quo in the region, but recent reports of Chinese military build-up near the strategic Doklam area is a cause of concern for India and also for Bhutan. Therefore, Bhutan King's visit is important in view of the changing geopolitical situation of the region," Srikantha Kondapalli, an expert on China told Sputnik.

Bhutan and India share close historical ties and have maintained extremely cordial relations. Earlier this year, when the Chinese military attempted to build a road at the Doklam area (Doko La in Chinese) — a region claimed as its own by both Bhutan and China — India decided to step in and deploy a huge number of soldiers in the region to block the Chinese advancements. This resulted in a bitter standoff between the Indian and the Chinese military that lasted for over a month and ended with an agreement to maintain status-quo in the region in order to avoid the detrimental impact of a full-fledged war.