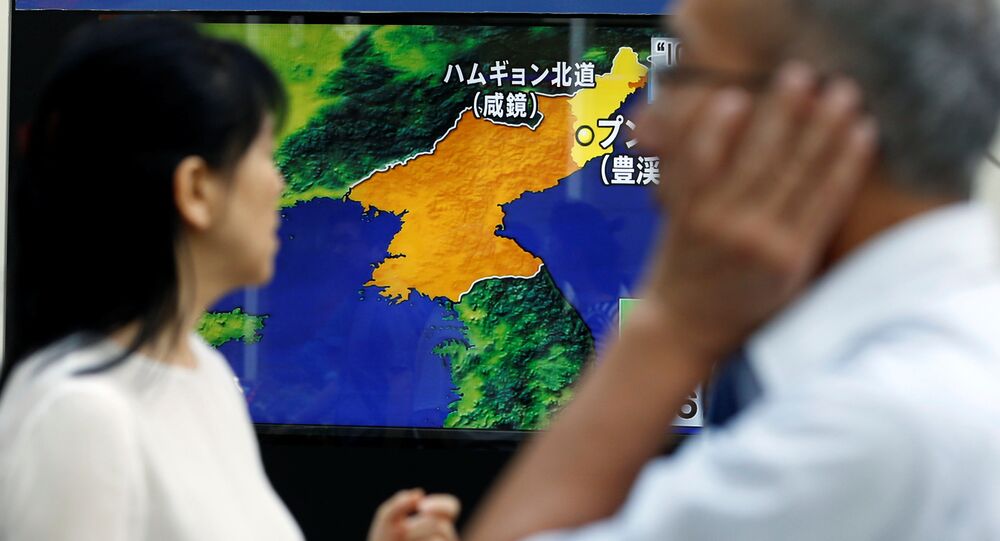 According to the NHK TV-channel, the Japanese prime minister explained the dissolution of the parliament’s lower house by the rising threat from North Korea.

"This will be an election that requires answering questions on how to protect Japan, to protect the peaceful life of the citizens," Abe said as broadcast by NHK TV-channel, adding that snap election would help voters evaluate his handling of North Korea’s threat.

On Monday, Abe announced his plans to call a new election for October 22 to ensure popular support for his government's agenda, which includes a 2-percent hike in the consumption tax. Earlier in the day, Japan’s lower house speaker Tadamori Oshima read out an order given by Emperor Akihito to dissolve the House of Representatives ahead of a snap election.

© AP Photo / Eugene Hoshiko
Main Street in Large Japanese City Closed to Defuse Unexploded WWII Bomb
The opposition criticized Abe for this step, accusing him of trying to evade the parliament’s probe into his alleged involvement in illegal schemes around various educational institutions.

The situation on the Korean Peninsula has become tense due to Pyongyang's missile launches and nuclear tests, all conducted in violation of the UN Security Council resolutions. The most recent test was conducted on September 15, when North Korea launched a ballistic missile, which flew over Japan before falling into the northern Pacific some 20 minutes after launch.