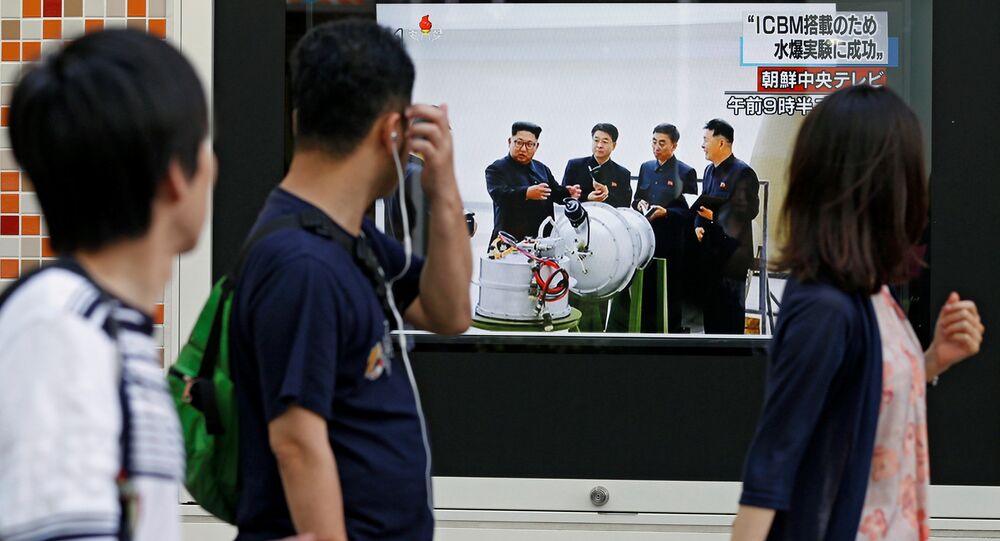 On Sunday, North Korea said it conducted its most powerful nuclear test of an advanced hydrogen bomb for a long-range missile. Russian expert Alexander Uvarov however told Sputnik that Pyongyang might have tested not a thermonuclear device but a “boosted device”, an atomic bomb that uses some hydrogen isotopes to increase its explosive yield.

North Korea claimed Sunday that it had successfully conducted a test of a hydrogen bomb, which had generated a 50 kiloton detonation, meaning that the blast was tantamount to exploding 50,000 tons of dynamite. The Japanese Defense Ministry later commented that the yield of the nuclear weapon that had been tested may have been as high as 70 kt, according to preliminarily estimates.

The bomb, it said, was designed to be mounted on its newly developed intercontinental ballistic missile (ICBM).

Alexander Uvarov, an editor-in-chief of the Russian website AtomInfo.ru, commented to Sputnik on the test, saying that judging by the announced yield of explosion (just a few dozen kilotons), it might have been not a thermonuclear device in the modern sense of the word, but a so-called "boosted device", an atomic bomb that uses some hydrogen isotopes to enhance its explosive yield.

"It is a long-established physical principle, offered way back at the end of 1940s – beginning of 1950s, which became one of the stages of development of the thermonuclear programs of the USSR and the US," he told Sputnik.

A boosted fission device uses a small amount of tritium and deuterium to produce a small-scale fusion reaction just as the fission chain reaction begins.

© REUTERS / KCNA
US, South Korea Consider 'Effective Military Reponses' to DPRK's Latest Nuclear Test
The neutrons released by the fusion reactions add to the neutrons released due to fission, allowing for more neutron-induced fission reactions to take place. The rate of fission is thereby greatly increased such that much more of the fissile material is able to undergo fission before the core explosively disassembles.

In boosted fission devices, the energy from the fusion reaction is insignificant. The point is to produce an intense neutron source. Virtually all the yield is produced by fission.

In the case of a hydrogen bomb, or a thermonuclear weapon, a fission bomb acts as trigger, this is called the primary stage. The enormous heat, pressure, and x-ray/gamma ray produced start a fusion reaction – the secondary stage.

The secondary is loaded with fusion fuel: deuterium and tritium.  The fusion reaction produces a much greater yield than that of the primary.

While the atomic bomb that was dropped on Hiroshima yielded a 13-18 kt blast, the yield of the first thermonuclear fusion bomb ("Ivy Mike"), which the US tested in late 1952, totaled 10.4 megatons, making it nearly 700 times more powerful than the first atomic weapon used in modern warfare.