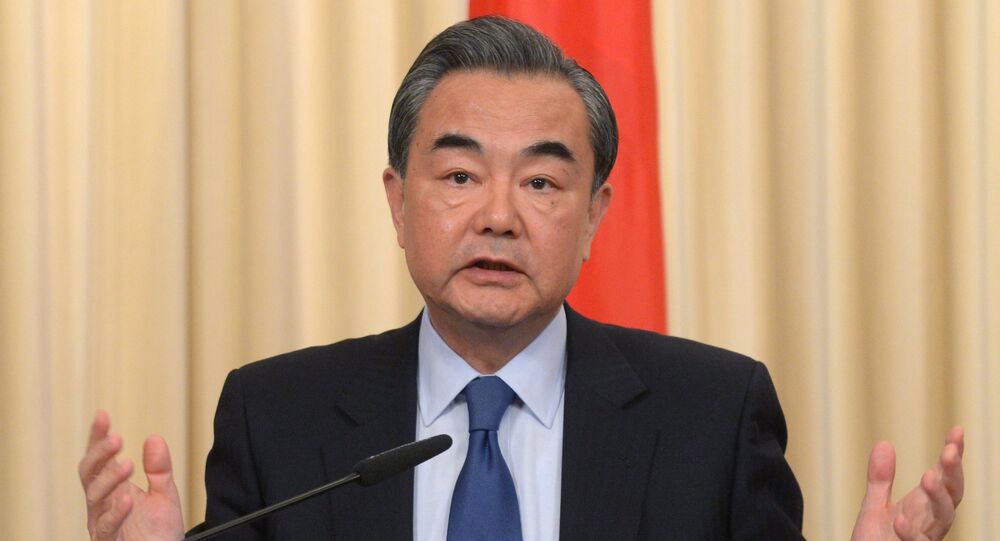 The Chinese foreign minister called on all sides of the North Korean crisis to act responsively to avoid escalation.

MOSCOW (Sputnik) — The situation with settlement of the nuclear problem of the Korean peninsula is at a critical point after adoption of sanctions, therefore all parties must act responsively to avoid escalation, Chinese Foreign Minister Wang Yi said on Sunday.

"After adoption of this resolution the situation with the nuclear issue on the Korean peninsula arrived at a critical point. We urge all parties to show responsive approach to making decisions in order to avoid further escalation," Wang told reporters in Manila.

The minister added that China is "still looking for a way to solve this problem through negotiations and hopes that all parties could seriously consider and approve the initiative of ‘double suspension,’ which was proposed by Beijing and is the most effective and reasonable."

© REUTERS / Kyodo
Japan to Collaborate With Russia, China to Implement UNSC Resolution on N Korea
The "double suspension" strategy calls on North Korea to end its nuclear and missile tests, while South Korea and the United Nations are supposed to end their joint military drills to ease tensions on the Korean peninsula.

"Chinese party called on North Korea to abstain from any actions violating UN Security Council resolutions, and called on the United States and South Korea not to exacerbate the situations on the Korean peninsula," the statement said.

According to the ministry, Wang noted that the current situation on the peninsula is "extremely complicated and sensitive, and affects bilateral relations between China and North Korea."

Late on Saturday, the UN Security Council unanimously adopted the resolution tightening the sanctions imposed on North Korea. The document bans imports of coal, iron, iron ore, lead and seafood from the Asian nation by the UN member states.

North Korea conducted two tests of an intercontinental ballistic missile in July. The second test, carried out on July 28, was called successful by Pyongyang. According to the state-run Korean Central News Agency (KCNA), the missile reached the altitude of 3,725 kilometers (2,314 miles) and traveled 998 kilometers for about 47 minutes before falling in the Sea of Japan.