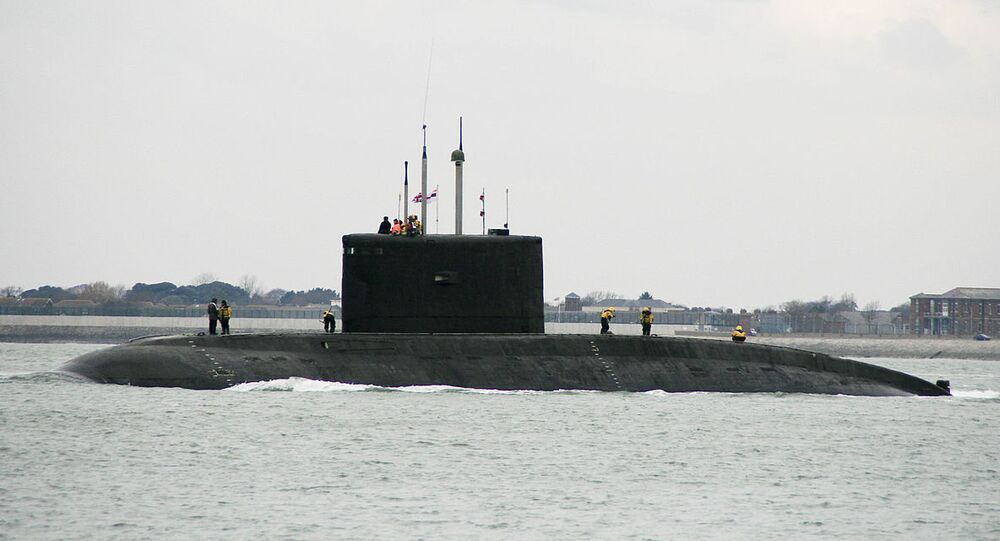 © AP Photo / Rafiq Maqbool
India Begins Sea Trial of Second Indigenous Submarine
New Delhi (Sputnik) — The US-based Resolve Marine Group had salvaged INS Sindhurakshak which had sunk in the Mumbai Naval Dockyard on August 14, 2013, after an explosion but the submarine was never able to return to full operational capability.

Naval sources told Sputnik the submarine capsized in the Arabian Sea and its resting point is 3,000 meters below the surface.
"When a warship is decommissioned, each and every nut and bolt is accounted for as it can be used on other vessels. The Sindhurakshak was a total write-off," a Navy official said.

The Sindhurakshak was a Project 877 Kilo-class diesel-electric submarine originally laid down in February 1995 at the Sudomekh shipyard in Saint Petersburg for the Russian Navy but later it was sold to the Indian Navy and commissioned into it in December 1997.

Manned by a crew of 52 sailors, the submarine was 238-feet long and had surfaced displacement of 2,325 tons. In the 2013 fire, 18 sailors lost their lives in the accident, which happened due to lapses in standard operating procedures. The reason found by an inquiry set up by Indian Navy was ‘organizational and individual lapses'. Two officers were found culpable in the inquiry. After a series of accidents, primarily due to fire at submarines, the then Indian Navy chief Admiral DK Joshi had resigned in 2014.

Presently, Indian Navy has 13 diesel-electric submarines in service-9 Kilo-class and four Shishumar (Type 209/1500)-class, however, only half of them are operational at any time. India has planned 18 conventional submarines apart from current 13 which are 17 to 31 years old. Two P-75 submarines are expected to join Indian Navy this year while a case for six P-75 I submarines are pending decision on strategic partnership model.