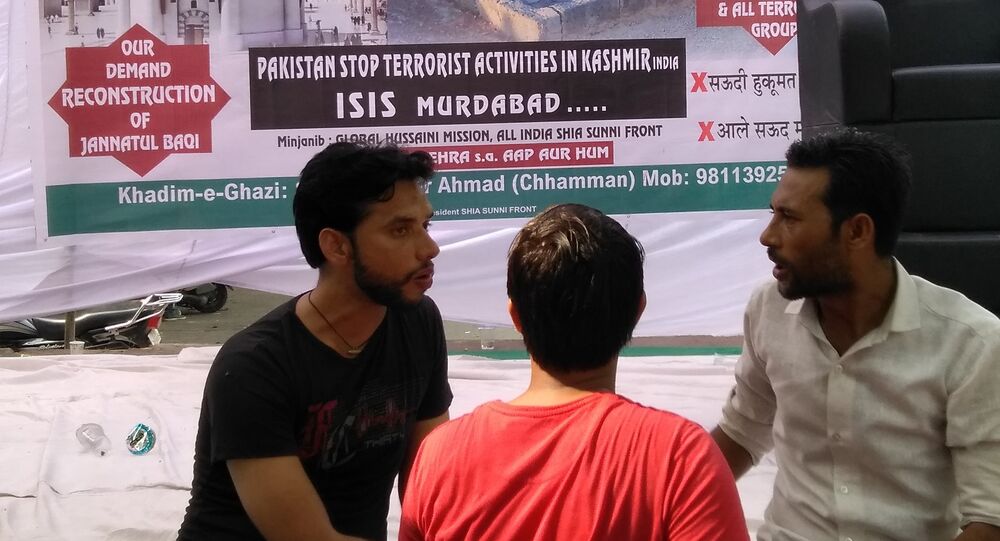 Thousands of Indian Muslims registered their protest in New Delhi against Saudi Arabia for its alleged connivance with terrorist outfits including Daesh. The protesters said the Saudi Arabia should stop funding Daesh, Al-Qaeda, Hizb-ul-Mujahideen and others or it will boomerang.

NEW DELHI (Sputnik) — Protesters also demanded the restoration of Islamic heritage popularly known as Jannat-Ul-Baqi and Jannat-Ul-Maula at the site in Saudi Arabia. Jannat-Ul-Baqi is shrine of Shahazaidi Fatima Zahra, the daughter and grandson of the Prophet of Islam.

​"We have gathered here (Jantar-Mantar) in thousands for two days to send a message to Saudi government that the way you (Saudi Arabia government) are behaving is totally against Islam. Daesh is being funded by Saudi government which is creating havoc in Syria, Iran, Iraq and India. We have submitted a memorandum to the Saudi Arabian embassy in New Delhi and asked to stop unlawful support to terrorists," Z Ahmed Chamman, the general secretary of All India Shia Sunni Front, said.

Down with saudi from sangli, India.
Protest against the terrorists supporter saudi.#standForBaqi pic.twitter.com/fzS2adxDD2

"People from all caste, community, and creed along with well-known scholars, poets, human rights activists joined the protest to mark the brutal crime of desecration of holy shrines at Madina Munawara, Kingdom of Saudi Arabia," the front said.