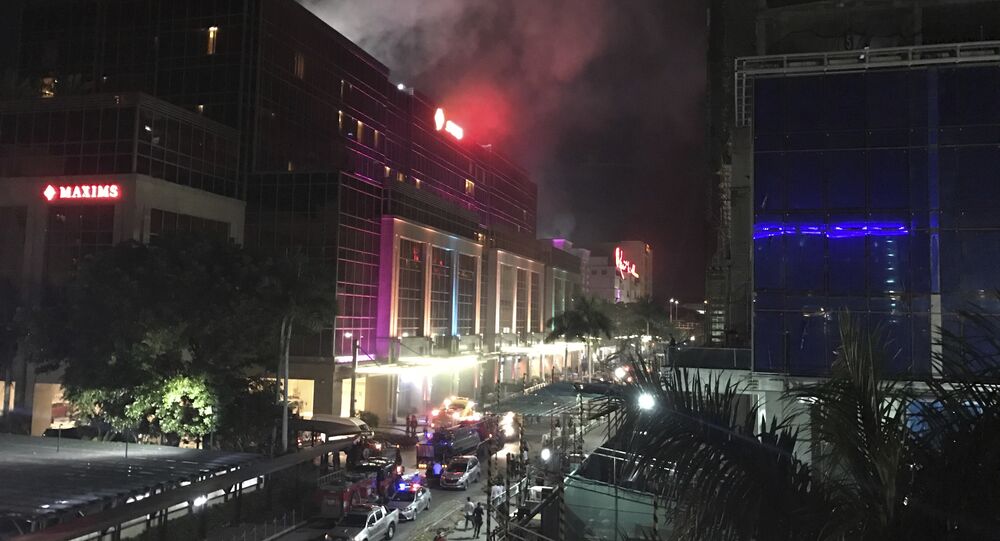 Gunfire and explosions were reported at a resort complex in the Philippines capital Manila late Thursday, with dozens said to be injured in the clash. Police, firefighters, and SWAT teams were deployed to the scen.

A masked gunman was spotted by hotel employees, firing down from the second floor at guests and staff. Another employee reported five shots fired from the third floor. Filipino news channel ANC said there were two gunmen in total.

#BREAKING
A resort in Manila is on lock down after gunfire erupted at the complex in Pasay City shortly after midnight of Thursday pic.twitter.com/SXGYA7RlrW

Fire broke out, and plumes of smoke were spotted rising from the resort. One witness told news site ABS-CBN that someone poured a flammable liquid on a casino table and then set it ablaze.

The Manila Times reported at least 25 injured, with others still trapped in the hotel. Videos of the wounded being rushed to the hospital have surfaced online.

The explosion occurred at a resort complex and popular tourist destination, Resorts World Manila (RWM). The complex is in Pasay, part of the Manila metropolitan area, and is next to Manila's airport, Ninoy Aquino International. One of the airport's terminals was put on lockdown, according to a Ninoy Aquino spokesman.

RWM reported being under lockdown after unknown men opened fire, and were working with police to keep guests and employees safe. "We ask for your prayers during these difficult times," they said in a tweet.

A Daesh member in the Philippines has claimed responsibility for the attack. While the Philippines has been embroiled in a battle with Islamic militants, that fight has taken place primarily in the southernmost regions of the archipelago, not the capital.

The Philippines' armed forces said police had regained control of the incident only an hour or so after it was first reported.

"We are monitoring the situation. The police is on top of the situation. We will issue a statement when we have a complete picture of the incident," military spokesman Restituto Padilla said.

UPDATE: A police chief has told AP that there is no evidence that the attack was a terrorist incident, and that there have been no confirmed reports of gunshot wounds.