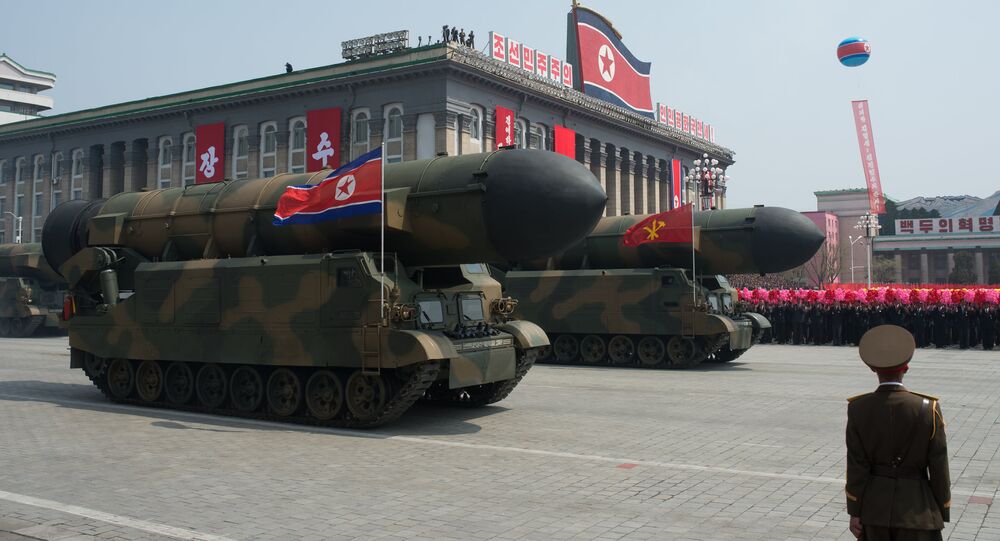 © REUTERS / KCNA
As North Korea Makes Progress in Missile Program, Pentagon Plans ICBM Interceptor Test
In an interview with Sputnik, Russian military expert and chief editor of the Arsenal Otechestva magazine Igor Korotchenko commented on Pyongyang's latest missile launch, which he said is a sign that the North Korean defense industry is closer to creating a new type of ballistic missile.

The South Korean military has detected what is believed to be a missile launch by North Korea, local media reported on Monday. It was later confirmed by the US as a short-range ballistic missile.

"This launch testifies to North Korea's military and industrial complex actively completing the program for the development of a family of ballistic missiles of various classes, implementing Kim Jong UN's orders to create a [missile] shield. All these missiles can carry a nuclear warhead," Korotchenko said.

He explained that Pyongyang is responding to the military and political pressure put by the United States.

Korotchenko added that even an unsuccessful missile launch contributes to the overall development of the North Korean missile program.

"North Korean experts analyze both successful and unsuccessful launches in order to identify problematic areas and find appropriate technical solutions." In any case, we can speak of the very rapid development of North Korea's missile program," he said.

Another Russian military expert, Alexander Perendzhiyev, for his part warned that North Korea will press on with its missile programs if it is not included in the negotiation process on nuclear arms limitation.

"The Democratic People's Republic of Korea will continue and, moreover, accelerate the implementation of its missile programs, if, with the help of Russia and China, it is not included in the process of negotiating nuclear arms limitation and missile testing," Perendzhiyev told Sputnik.

He said that although North Korea "does not and will not react to the indignation of the United States and Japan as well as UN Security Council resolutions," Pyongyang should be involved in negotiations at the level of the United Nations and regional organizations.

"Given that North Korea is a UN member, one could try to organize negotiations at this level," according to Perendzhiyev.

"Considering that the country is closed from the world and not represented in regional international organizations, it is necessary, with the help of China and Russia, to try to prod Pyongyang to act as an observer at the Shanghai Cooperation Organization, for example," he said.

"Within the framework of this platform one should use economic leverage to try to lure North Korea into curtailing its nuclear and missile programs," Perendzhiyev concluded.

Since 2006, Pyongyang has conducted five nuclear tests and a series of missile launches, including from submarines.

© REUTERS / KCNA
‘Trust’ Us: Tillerson Urges North Korea to Back Off Nuke Program
At the same time, the North Korean leadership rejects the demands of the international community and the UN Security Council to stop its nuclear and missile tests.

Pyongyang cites the threat emanating from the United States which retains more than 28,000 troops in South Korea, periodically deploying strategic weapons for training there and refusing to conclude a peace treaty with North Korea.