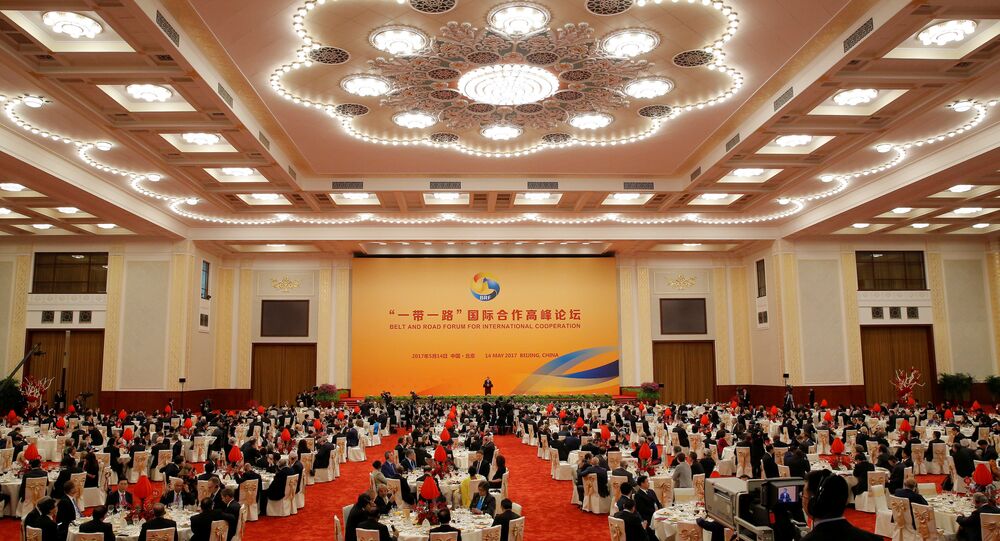 Fears over China’s growing geopolitical influence in the region were the real reason behind India’s hesitance to endorse China’s "One Belt One Road" (OBOR) initiative, championed by Chinese president Xi Jinping, despite its official explanation of sovereignty issues over the China Pakistan Economic Corridor, analysts told Sputnik.

© Sputnik / Sergey Guneev
China's New Silk Road: 'When It Comes to Business There's No Need for War'
MOSCOW (Sputnik), Tommy Yang — When 29 heads of state gathered in Beijing on Sunday for China’s first major international summit to celebrate the "One Belt One Road" initiative, Indian Prime Minister Narendra Modi was nowhere to be seen. In fact, India did not even send an official delegation to the 2-day Belt and Road Forum for International Cooperation despite repeated invitation by Chinese authorities.

A major snub to China

Officially, Indian authorities said the nation’s main concern is its sovereignty over Kashmir, which India considers part of its territory and over which it has been in dispute with Pakistan for decades. The China Pakistan Economic Corridor happens to cover the disputed territory in Kashmir.

"Only by respecting the sovereignty of countries involved can regional connectivity corridors fulfill their promise and avoid differences and discord," Indian Prime Minister Narendra Modi said during a speech at the second Raisina Dialogue in January.

But experts said India’s decision to hold out on China’s OBOR initiative is more than just sovereignty concerns.

"India fears China’s geopolitical push right across into the Indian Ocean. India’s dispute with Pakistan over Kashmir has been going on for over 70 years. This issue will not be solved by China," Kanti Prasad Bajpai, a professor on Asian Studies at Lee Kuan Yew School of Public Policy in Singapore, who is currently working on a book on India-China relations, said.

© REUTERS / Etienne Oliveau
China Trying to Fill the Vacuum After Trump Bailed on TPP Trade Deal
Bajpai suggested that India’s attitude towards the OBOR initiative is in line with the nation’s foreign policy under Prime Minister Modi.

"After previous administrations’ attempts to normalize relations with China failed to resolve even border conflicts with Beijing, Modi reversed his position [when dealing with China]. He actively looked to build a coalition with the US, Japan and Australia to resist China," he said.

Despite friendly starts such as being the first Indian official to set up a social media account in Chinese language during his first state visit to China in 2015, Modi’s tenure as India’s Prime Minister was filled with conflicts and disputes with Beijing after taking office in May 2014.

India’s bid to become a member of the Nuclear Suppliers Group (NSG) failed in June 2016, following opposition from China. The NSG sets global rules for international trade in nuclear energy technology. Earlier this year, China vetoed a UN Security Council resolution to designate Pakistan-based Jaish-e-Mohammed (JeM) chief Masood Azhar as a global terrorist. India says Azhar is the mastermind of several major terrorist attacks in the country, including the attack on India’s Pathankot Air Force base in January 2016.

Amid China’s push to export its high-speed rail technology overseas, India awarded the signature $15 billion high-speed rail project, linking Mumbai and Ahmedabad, to Japan in December 2015. As construction for the ambitious railway project is slated to begin in 2018, the Indian government imposed an anti-dumping duty on steel products from China in November 2016. China’s nationalistic tabloid Global Times called the move from Indian authorities a "protectionist stance" in an opinion piece earlier this year. According to statistics from Lange Steel Information Research Center in Beijing, China’s steel export to India fell to 3.31 million ton in 2016, a 30.4% drop from the previous year.

Under Prime Minister Modi, Indian authorities introduced the "Act East Policy", aimed at reviving ties with the Cambodia, Laos, Myanmar and Vietnam (CLMV) to boost trade and investment in the region. All of the CLMV nations have also endorsed China’s OBOR initiative.

© Sputnik / Natalia Seliverstova
One Belt, One Road: Why Russia Benefits the Most From China's Flagship Project
After taking over as China’s top leader in late 2012, Chinese President Xi Jinping pushed forward a grand campaign of "the great revival of China", both domestically and internationally. Echoing his domestic slogan of "the Chinese dream," Xi proposed his ambitious "One Belt One Road" initiative, which covers the Silk Road Economic Belt and the 21st Century Maritime Silk Road, creating a network of railways, roads, pipelines and utility grids that would link China with Central Asia, West Asia and South Asia.

During his keynote speech at the summit in Beijing over the weekend, Xi stressed his OBOR initiative took inspiration from the ancient silk routes that brought prosperity and boosted the development of the region.

With India projected to overtake China’s population by 2022, according to a UN study of global population trends, the South Asian nation with the sixth largest economy in the world that is also experiencing rapid growth of around 7% each year, is difficult for China to ignore in its OBOR initiative.

"Without India, the OBOR initiative will not succeed. Through the OBOR initiative, China is trying to migrate its labor intensive manufacturing industries to other countries. But they also need a market for those products. That market will be India," Jabin Jacob, a professor at the Institute of Chinese Studies in Delhi, India, said.

New Delhi is still willing to work with Beijing on specific projects, such as the Asian Infrastructure Investment Bank and a high-speed rail linking Kunming in China with Kolkata in India.

"Competitive cooperation will be the hallmark of India-China relations. By 2050, the two countries will account for about half of global GDP. The 21st century will become an Asian century led by China and India," Ajay Chhibber, a professor at the National Institute of Public Finance and Policy in New Delhi, India, said.

Chinese experts suggested it is up to Indian authorities to decide whether they want cooperate with China or not.

"There is still room for cooperation between China and India. It’s risky for Modi’s administration to continue to be confrontational with China. It will lead to further isolation of India," Liu Jiangyong, an international relations expert at Tsinghua University in Beijing, said.

According to official figures from China’s General Administration of Customs, India’s trade deficit with China expanded to $46.56 billion in 2016, as Indian exports to China fell by 12.1% from the previous year to $11.76 billion, continuing the declining trend. After China overtook the United Arab Emirates as India’s largest trading partner in 2013, when Sino-Indian trade reached $49.5 billion, bilateral trade between the two Asian nations boomed to $70.8 billion in 2016.