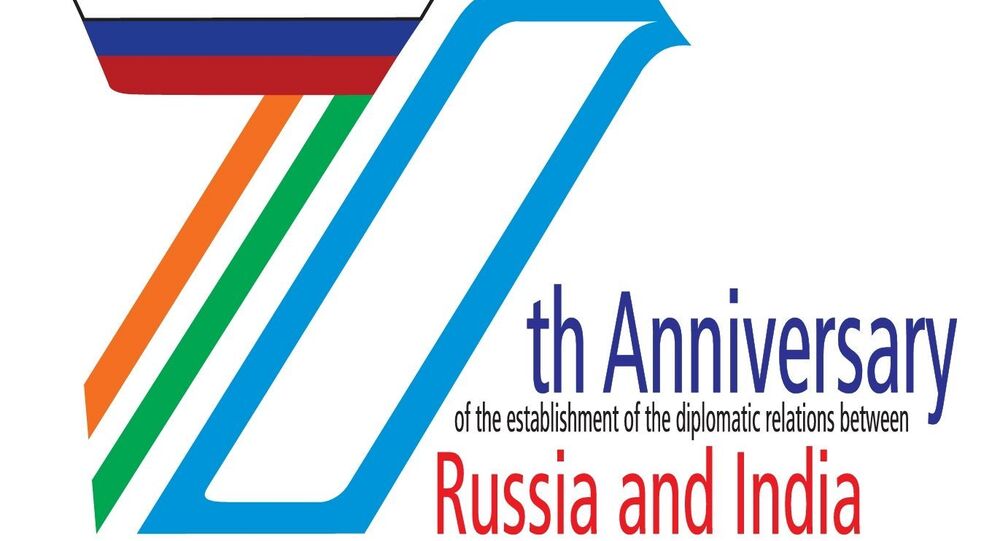 India and Russia have charted a year-long celebration to mark the 70th anniversary of their diplomatic relations. The two countries released a logo to mark the occasion and the logo has the flags of both countries with the figure 70 written on it.

New Delhi (Sputnik) The logo was selected from the 45 different entries that came in from participants in India and Russia.

It was on April 13, 1947, four months and two days before the declaration of Indian independence, that India and Russia established their diplomatic ties and since then their ties has blossomed into a strategic partnership. Both countries are celebrating their 70th anniversary of diplomatic ties throughout this year.

​The India-Russia partnership has stood the test of time and is a privileged and strategic understanding.

"India-Russia ties are unique. It is not merely on the government-to-government level but it is much deeper into the psyche of the people of both the countries," Anuradha Chenoy, Professor of Russian and Central Asian Studies, JNU told Sputnik.

"People-to-people contacts is one of the major highlights of this partnership. We have adopted each other's culture and language. Russia has been our defense partner since decades and even today most of the defense equipment is of Russian origin. The core of our partnership is reliability, which is really unique. Russia has helped us build nuclear power plants when the US and other countries had put sanctions on us. Although recently India has built closer ties with the US and other European countries, no one can replace Russia. I hope that India-Russia ties will be further strengthened in the coming years," Chenoy said.

Russia, India Have 'Key Roles' in Bringing Stability to the World