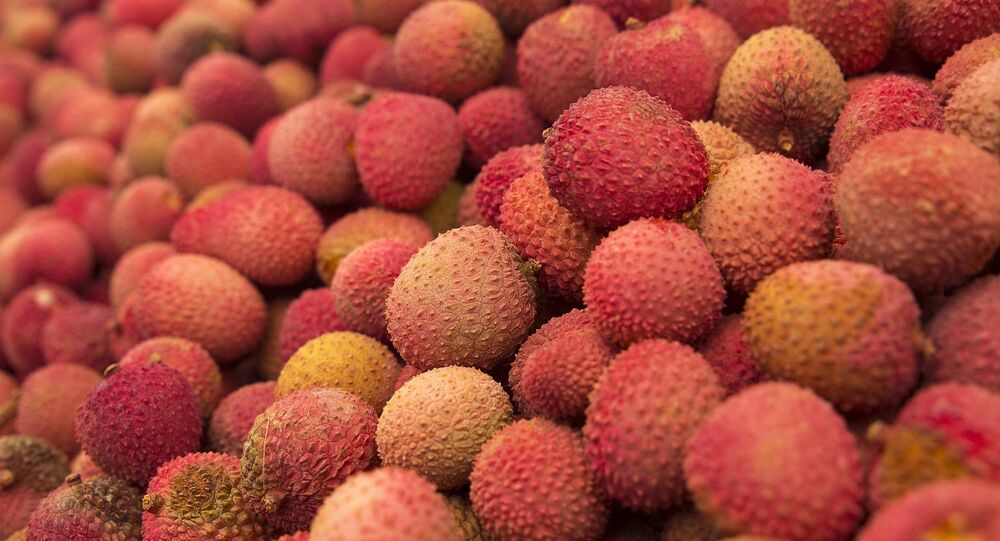 Scientists have solved the mystery of what was happening to hundreds of children in Eastern India succumbing to an unknown illness since the last two decades.

Youtube / ScottDW
Fruit Ninja Goes on the Warpath for Real
New Delhi (Sputnik) — Tropical fruit lychee has been identified as the culprit behind the mysterious seasonal illness that took the lives of hundreds of children in Indian state of Bihar and West Bengal. The epicenter of the illness was Muzaffarpur in Bihar which is famous for lychee cultivation.

A team of American and Indian scientist who had been jointly investigating the case has claimed that when eaten on an empty stomach, the amino acid present in the lychee fruit was dramatically lowering blood glucose levels, sending children into hypoglcaemia causing sudden seizures leading to death in 40% of cases.

Scientists say that consumption of lychee alone is not the cause of the illness but lychee consumption in huge quantity combined with skipped evening meal affect glucose synthesis causing the illness.

“Parents in affected villages report that during May and June, young children frequently spend their day eating litchis in the surrounding orchards; many returned home in the evening uninterested in eating a meal. Skipping an evening meal is likely to result in night-time hypoglycaemia, particularly in young children who have limited hepatic glycogen reserves, which would normally trigger β-oxidation of fatty acids for energy production and gluconeogenesis. However, in the setting of hypoglycin A/MCPG toxicity, fatty acid metabolism is disrupted and glucose synthesis is severely impaired, which can lead to the characteristic acute hypoglycaemia and encephalopathy of the outbreak illness,” reads the study published by The Lancet.

Youtube / ALLTVCHANNEL2
Watermelon Blast: Truck Carrying Fruit Crashes Into Toll Booth
According to a report by the India Epidemic Intelligence Service, the sudden illness that struck with the rise in temperatures in around mid-May every year was mainly characterized by sudden seizures followed by comatose. Parents bringing their children to the hospital with acute brain swelling mostly claimed that they were healthy the night before. The outbreak ended suddenly in July with the arrival of monsoon every year.

Investigations into the mystery illness had begun as early as 1995. The illness was ascribed to various phenomena like heat stroke, infections borne by rats, bats and flies and even pesticides used in the ubiquitous lychee orchards in the region.

The joint investigation team of India’s National Center for Disease Control and the India office of the Centers for Disease Control and Prevention in Atlanta was prompted to suspect the lychee fruit when they compared the illness with the “Jamaican vomiting sickness” which had similar symptoms and is ascribed to hypoglycin, a toxin found in the ackee fruit that inhibits the body’s ability to synthesize glucose, leading extremely low blood glucose levels. When they tested the lychee fruit they detected the same toxin. This led to health officials in India closely examining what the afflicted ate eaten, drunk and breathed. They urged parents to be sure not to feed unripe lychees to young children on empty stomach and to limit their consumption of the fruit otherwise as well. In two seasons, the number of reported cases per year dropped to less than 50 from hundreds, thus establishing that consumption of the fruit combined with skipping evening meal was the reason behind the deaths.

Fruit Ninja Goes on the Warpath for Real