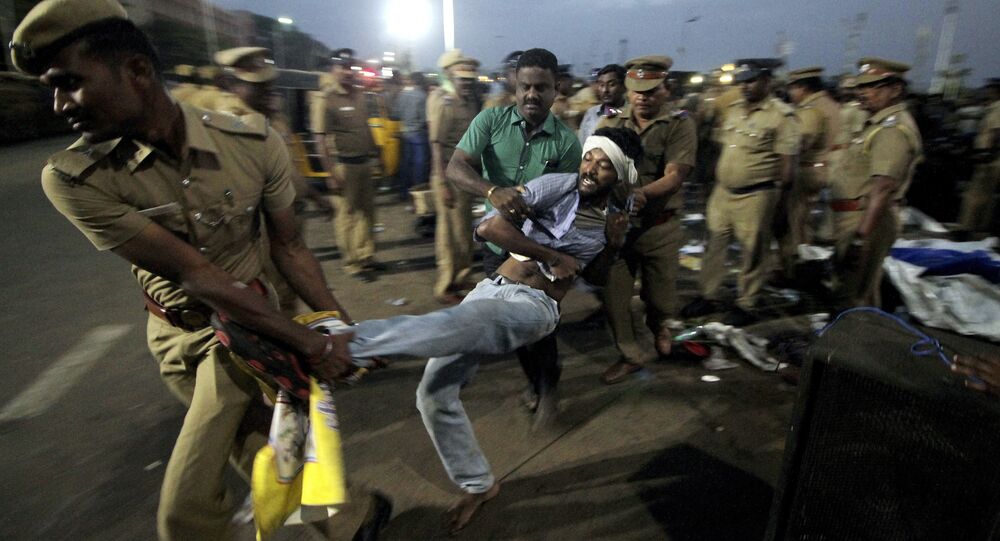 Protests in India’s Tamil Nadu state turned violent after a week of demonstrations against a court ordinance banning ‘Jallikattu,’ a form of bullfighting that is a traditional sport in the region. The state government lifted the ban on Monday and beseeched protesters to disband.

​The protesters barraged police with stones, who responded with tear gas grenades. Protesters also set several dozen vehicles ablaze. The protests have lasted all week and severely slowed industry in Chennai, the capital of Tamil Nadu and the epicenter of the protests.

​Over 100 protesters have been arrested, and 22 police officers were reportedly injured. However, Tamil Nadu police announced that the protests were generally "orderly" and "disciplined." The sustained protest appears to have worked, as senior police officer P.K. Kannan announced that "Jallikattu will be celebrated. We urge the protesters to go back home immediately," in an official statement. Police have begun evicting protesters who refuse to quit, as "their purpose has been fully achieved."

​The protest movement was supported by numerous Tamil celebrities, as well as prime minister Narendra Modi. As the ban came from India's Supreme Court, some have called the outrage a proxy conflict between the Tamil people and the central government.

#Alanganallur #Jallikattu Called Off As Protesters Want A Permanent Fix (A Law/ Not #JallikattuOrdinance) To Solve The Issue. #Dindigul pic.twitter.com/NelUoQSjAr

​The protests caused a significant slowdown in Chennai's economy. Ford India announced that a factory was closed for several hours due to employee safety concerns, and Indian automobile manufacturer Ashok Leyland also closed on Monday.

​Unlike the more well-known Spanish variant of bullfighting, Jallikattu does not involve the use of lances or swords and bulls are rarely killed. Instead, a team of men attempt to hold onto the bull for a certain period of time and sometimes grab flags that are attached to its horns. The sport, which dates to 500 BC, is wildly popular in Tamil Nadu during the mid-January Mattu Pongal celebrations.

​While striking the bull is prohibited, animal rights groups point out that the bull suffers injury from participants biting or twisting the animal's tail. To control the bulls before and after fights, the animals are reportedly prodded with sharp objects such as scythes and knives.

​Groups such as the Animal Welfare Board of India, the Federation of Indian Animal Protection Organisations, and PETA India have all protested the practice. PETA also claims the events are dangerous for spectators and participants, causing 1,200 injuries between 2010-2014.

​Several attempts have been made to regulate or ban Jallikattu in recent years. The Supreme Court of India outlawed Jallikattu in May 2014, but the ban has been repeatedly flouted by government and private organizations.

​In January 2017 the Supreme Court ordered the government of Tamil Nadu to arrest anyone who participated in a Jallikattu event, sparking the protests.

​The first Jallikattu events after the ban was lifted have reportedly led to as many as 90 injuries and two human deaths.