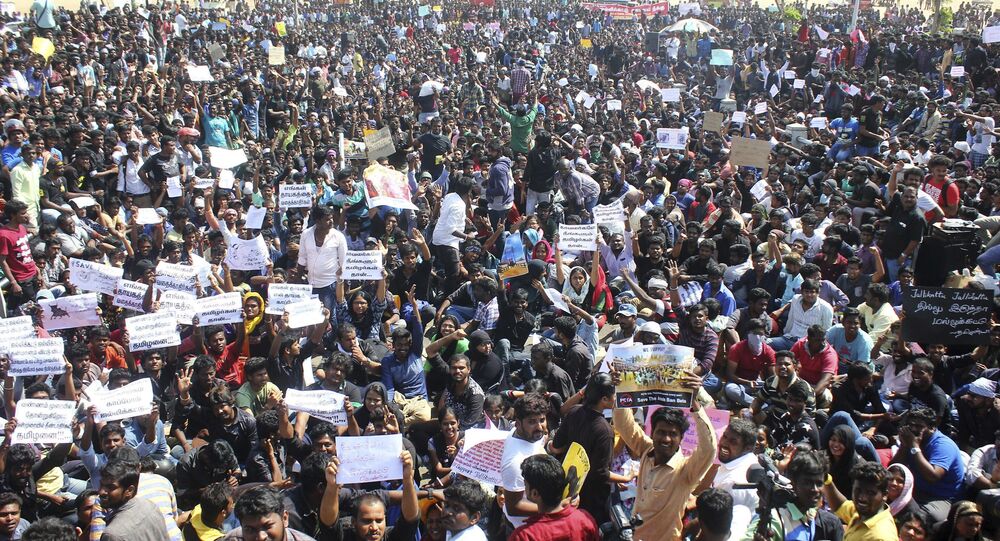 The protests over bull fighting or Jallikattu have split the liberals and traditionalists over the definition of what should be interpreted as cruelty in a sport, with a folk tradition of Tamil Nadu ought to be banned.

NEW DELHI (Sputnik) — Hundreds of thousands people in India's southern state of Tamil Nadu have come together to protest the ban on the popular bull-taming sport — Jallikattu. The protestors gathered at the Marina beach in Chennai on Tuesday and refused to budge all through the night until Chief Minister O Panneerselvam made the government's position clear on conducting the sport in the future.

Man buries himself in sand in support of #jallikattu on Marina beach in Chennai pic.twitter.com/JVB3qmsXkX

​The local police have booked several persons for letting loose their bulls in defiance of the Supreme Court's orders. Reports suggested that the bull-taming sport were held in a low key manner, without proper safety arrangements. The state administration refused to acknowledge the accidents that were reported from such venues.

"Ignoring Tamil peoples' voice is dangerous for the society- don't play with fire. Entire India is one on this issue- we shall not allow anyone to divide Indians and platy divisive politics. Let's stand under the Tricolor [Indian national flag] and forge national unity for Jallikattu," says Tarun Vijay, former senior parliamentarian.

During Jallikattu, a rampaging bull is released into a crowd. The brave among them attempt to grab the bull's hump and ride it for as long as possible, attempting to bring it to a stop. In some cases, participants must ride long enough to remove flags affixed to the bull's horns. Bulls are bred specifically by people of the village for the event and attended mainly by many villages' temple bulls.

In 2014, India's apex court banned the sport called Jallikattu on grounds of animal cruelty. The order, however, didn't go down well with Tamil Nadu political parties which sought a review of the judgment. The Supreme Court turned down the plea and in January 2016, the Central Government issued a notification lifting the ban on Jallikattu in Tamil Nadu with certain restrictions.

But People for the Ethical Treatment of Animals (PETA) got a stay order from the Supreme Court, meaning the sport was suspended. Those supporting the sport had demanded that the court pronounce its verdict before a major festival on January 15, the day this sport witnesses its high noon. The court however refused to buckle and reserved its verdict on a later date, sparking more protests across the state.