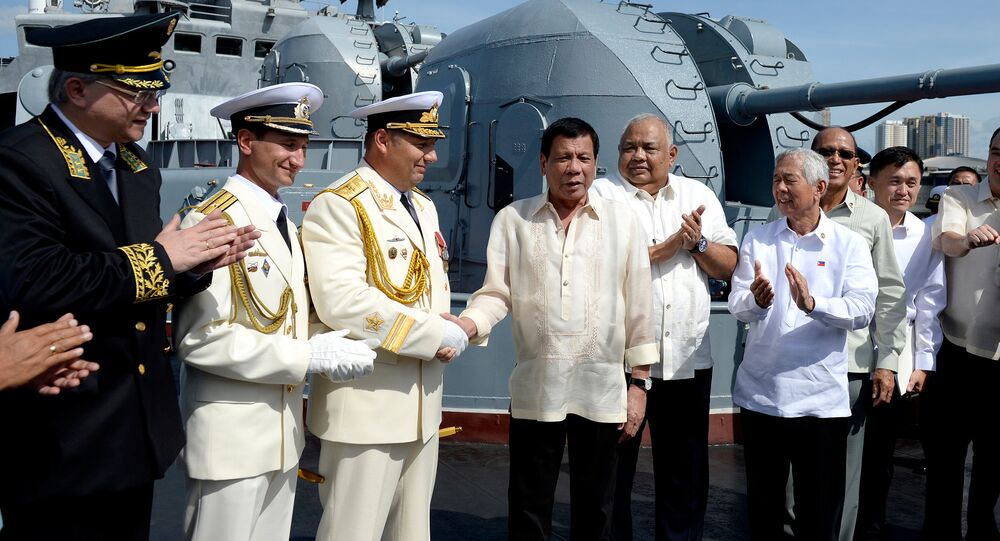 Philippine President Rodrigo Duterte went on board of the Admiral Tributs, Russian anti-submarine destroyer, which arrived in Manila, according to the statement of the Russian Embassy.

MOSCOW (Sputnik) — Philippine President Rodrigo Duterte on Friday went on board a Russian anti-submarine destroyer in the port city of Manila, the Russian Embassy in the country said.

© AFP 2021 / TED ALJIBE
Captain Duterte: Philippine President May Go Aboard Russian Warships in Manila
The Admiral Tributs destroyer arrived in the Philippine capital on Tuesday together with a sea tanker Boris Butoma in a gesture of goodwill and to restock food. The ships are due to leave by Saturday.

"President Duterte went aboard the Admiral Tributs today, he took a tour of the ship in the company of Rear Adm. [Eduard] Mikhailov, the mission chief and deputy commander of the Pacific Fleet, as well as Russian Ambassador to the Philippines Igor Khovaev," the Embassy told RIA Novosti.

President Duterte is expected to visit Moscow early this year at an invitation of Russian President Vladimir Putin to discuss a wide range of topics, including trade in weapons. Duterte has not ruled out a defense alliance with Russia.