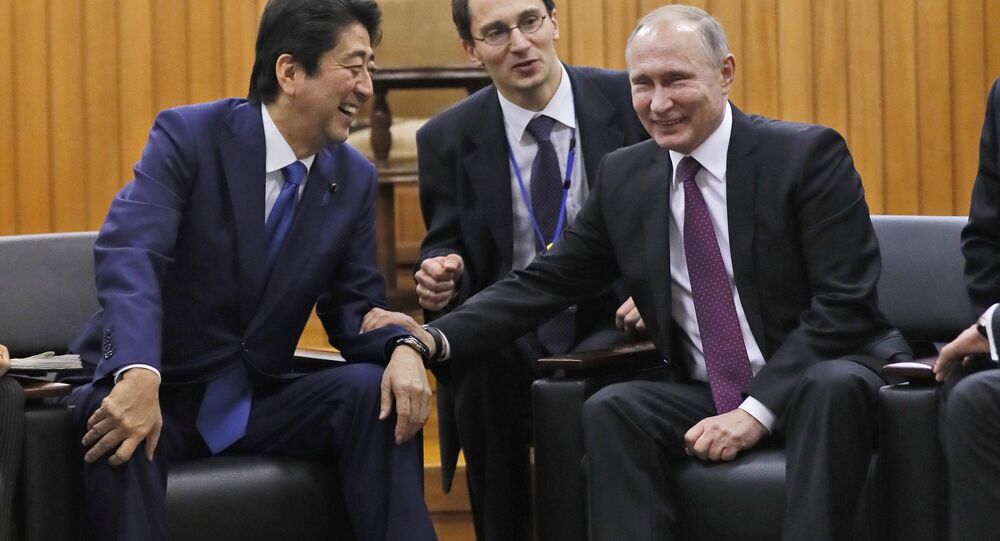 During his two-day working visit to Japan, Russia’s President Vladimir Putin met with Japanese Prime Minister Shinzo Abe to sign a raft of investment, tax and labor cooperation accords. Sputnik Japan asked leading Japanese experts on Russia to share their views on the significance of Putin’s visit for relations between the two countries.

Shimotomai Nobuo, a leading expert on the Soviet Union and Russia, and a law professor at Hosei University in Tokyo, described the summit as the start of a much-expected reset in Russian-Japanese relations.

“Eighteen years ago, when Keizo Obuchi was Prime Minister, there was much talk about joint ownership with Russia [of the disputed South Kuril Islands]. However, Obuchi was not very keen on pushing this issue, which he had inherited from his predecessor Ryutaro Hashimoto,” Professor Nobuo said in an interview with Sputnik Japan.

© Sputnik / Michael Klimentyev
Putin's Visit to Japan Strengthens Ties, Leaves Uncertainty Over Kuril Islands
He added that things had changed since then and that Prime Minister Abe and President Putin have personally overseen the start of consultations on joint economic activity on the islands, and that he believed that both countries would only benefit from this process.

Toshihiko Ueno, a Russian-affairs expert at Sophia University in Tokyo, said that if the goal of the summit was to bring bilateral relations to where they stood three years ago, he believed that this goal had been achieved.

“However, if we look at this meeting from the standpoint of signing a peace treaty between our two countries, I don’t see any tangible progress achieved here,” he added.

“Well, we did manage to take a step forward, but Russian officials want [the joint economic activity on the islands] to be effected in line with Russian laws and I didn’t see any clear-cut statements to this effect from Premier Abe either,” Toshihiko Ueno continued.

He added that a number of important things, such as the size of the value-added tax the would-be joint venture will have to pay, still need to be clarified and that Japan might have to back off on some of its demands.

“There is one thing our leaders agree on though: we start off by launching joint economic activity on the four islands, and then we sign a peace treaty,” he noted.

He added that the implementation of joint economic activity on the islands was a very sensitive matter for Japan but since Premier Abe had raised this issue as a precondition for signing a peace treaty, he believed that they would eventually be able to work it out.

“Just how actively our Ministry Economy, Trade and Industry and our Foreign Ministry are going to be involved in this depends on Prime Minister Shinzo Abe, who initiated this whole idea [of joint economic activity of the islands],” Dr. Ueno said.

The visit, postponed since 2014, was widely seen as a breakthrough in the Russian-Japanese relations.

On Thursday, Vladimir Putin and Shinzo Abe held talks in the city of Nagato in the Yamaguchi Prefecture. On Friday, both leaders continued their negotiations in Tokyo and then held a joint press conference.