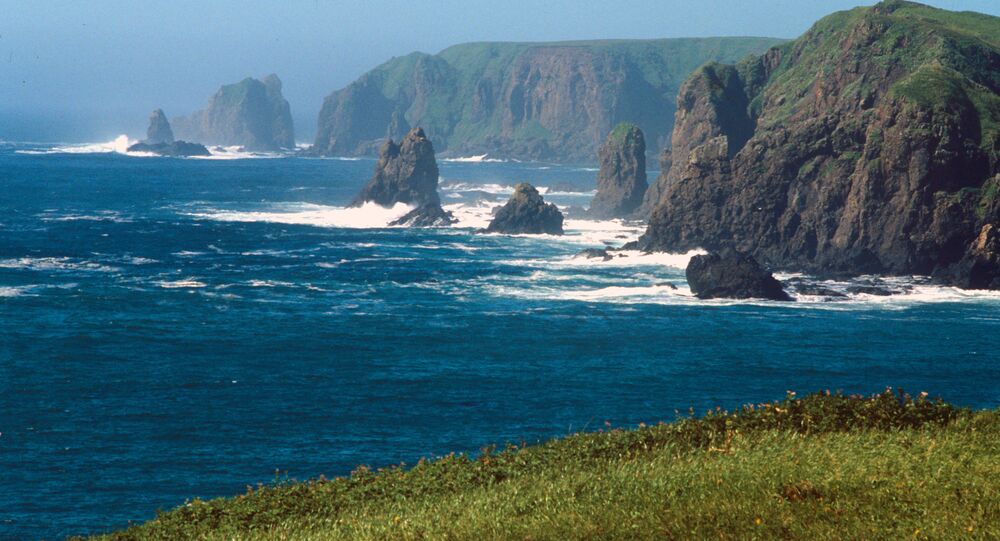 Mutual trust and cooperation hold the key to signing a peace treaty between Russia and Japan, Foreign Minister Sergei Lavrov said when summing up the results of his December 3 meeting with his Japanese colleague Fumio Kishida.

Lavrov added, however, that the road to aligning the two countries’ positions on the Kuril Islands could be long and bumpy.

© REUTERS / Lee Jae-Won
Russia, Japan to Sign Deal on $910Mln Joint Investment Fund in December
Shortly after, the Tokyo-based newspaper Mainichi ran an article, which said that the plans to establish a special economic zone on the South Kuril Islands now being discussed by Moscow and Tokyo could snag over the islands’ unclear legal status.

Fumio Kishida had made it clear that Japan would find it hard to start implementing the plan as long as the islands remain under Russian control.

In an interview with Sputnik Japan the director of the Center for Japanese Studies in Moscow Valery Kistanov mentioned a notable spike in diplomatic and economic contacts between the two countries prompted by Lavrov’s meeting with Kishida.

“We have seen the drafts of joint projects in energy, agriculture, high technology exports and many other projects the Russian Far East can benefit from,” he said, adding that nearly 30 most promising projects could be signed shortly.

As for the issue of the islands, the Japanese are not making economic cooperation directly contingent on the favorable resolution of the territorial issue because they too are going to benefit from such cooperation.

“They need stable supplies of energy resources and they also need access to the Russian market. Japan  would like to export infrastructure to Russia. All this will give a new boost to Japan’s stagnant economy,” Kistanov noted.

Andrei Fesyun, an expert at the Higher School of Economics in Moscow, said that setting up joint ventures on the islands was a highly complicated issue.

“There was an idea to build a spa hotel there and other things but there are more to this than just economic gain for business. For the Japanese the Kuril Islands are a very sensitive issue and what Prime Minister [Shinzo] Abe is now doing is nothing short of a heroic feat. He is the first Japanese Premier to openly say that he wants to have better relations with Russia. I can imagine how much resistance he has to deal with, that’s why I don’t think we should expect any quick breakthroughs here. One thing is clear: we are now ready to meet and talk things over,” he said.

© AP Photo / Toru Hanai
Lavrov: Russia-Japan Projects to Bring Bilateral Ties to New Level
Commenting on last week’s talks in Moscow, President Putin’s press secretary Dmitry Peskov said that “we hope for progress in our economic and investment cooperation. There is an impressive raft of bilateral documents waiting to be finalized now.”

In any way, separating politics from economics Japanese politicians spoke about prove be beneficial to both countries.

Fumio Kishida arrived in Moscow on December 3 for a two-day visit ahead of President Vladimir Putin’s planned official trip to Japan later this month. Lavrov said that Kishida’s meeting with President Putin on Friday showed directions in which Japanese-Russian relations should progress.

The Japanese foreign minister said he wanted to discuss bilateral ties, North Korea, Syria and Ukraine during the meeting with Lavrov.

Meanwhile, Japan’s Foreign Ministry has expressed hope that President Vladimir Putin’s visit to Japan on December 15-16 would further strengthen relations between the two countries. According to the statement, Putin will meet with Japanese Prime Minister Shinzo Abe in Nagato and in Tokyo.

The Russian-Japanese relations are tainted by Tokyo's claims to several Russian islands.

Japan lays claims to four Kuril Islands of Kunashir, Shikotan, Habomai and Iturup, which belong to Russia according to the 1951 San Francisco Peace Treaty that transferred the control of the islands to the Soviet Union. Japan's stance prevented Moscow and Tokyo from signing a peace treaty after World War II.

The relations between the two states have recently been re-energized. In September, Abe took part in the Eastern Economic Forum in Russia's Vladivostok, during which he held three-hour talks with the Russian president.

One of the outcomes of the meeting was the announcement of Putin's visit to Japan on December 15, which has been postponed from 2014.