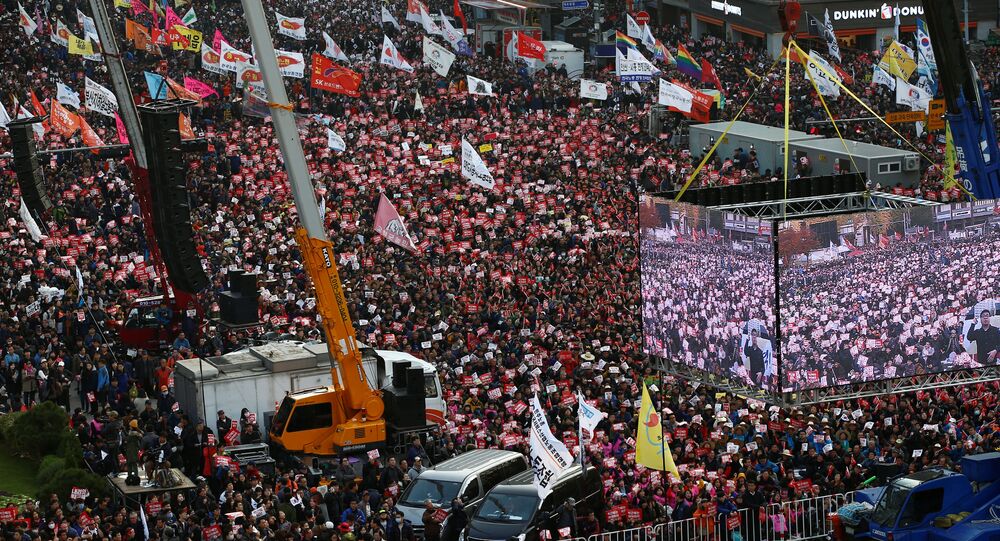 Activists participating on Saturday in a large-scale demonstration in South Korea's capital of Seoul demanding the resignation of President Park Geun-hye scuffled with law enforcement officers, protecting the order at the rally, Yonhap news agency reported.

TOKYO (Sputnik) — Earlier in the day, hundreds of thousands took to the streets of the central part of Seoul. At the same time, police reportedly sent some 25,000 officers to patrol the streets during the rally and built barricades to protect Gyeongbok Palace, which is Park's residence.

There are more people than in 2002 World-cup or 2008 Beef Protest. S Koreans have spoken. This is history. @KoreaExpose #Seoul #Korea #박근혜 pic.twitter.com/wLHDdxrAXg

Thousands of protesters squared off near the police positions near the city's Gyeongbokgung subway station and several minor clashes erupted.

At least seven protesters have been sent to hospital during the day, while four police officers have also been injured, the media outlet added.

The revelation has caused massive anti-government protests in the country, with people and opposition parties calling on the president to resign. An arrest warrant has been issued for Choi, while the president expressed her willingness to testify in the case.