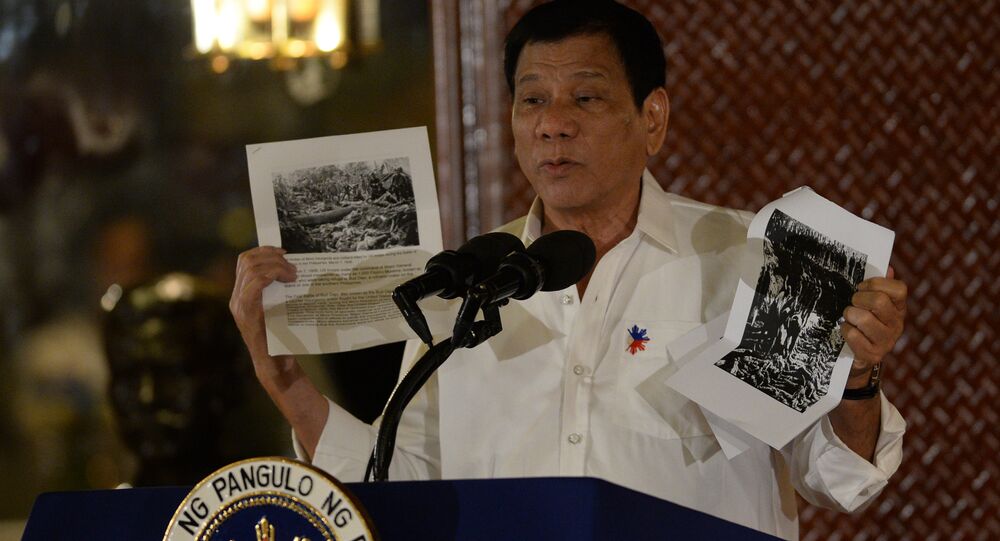 Amid a current cool in relations with Washington, Philippine President Rodrigo Duterte now wants to turn to Russia and China using them as a counterbalance to the US and the West.

In October Duterte will pay working visits to Beijing and Moscow where he will be meeting with Prime Minister Dmitry Medvedev.

"I will open up the Philippines for [Russia and China] to do business and will create alliances of trade and commerce. I will open telecommunications and airlines [to foreign companies],” he said.

This came as very alarming news for the US which maintains a big military presence in the Philippines.

The island state is a key element of Washington’s Asian sector of missile defense stretching from Japan to Australia and the possible loss of its military bases there would seriously undermine the United States’ positions in the region.

© AP Photo / Aaron Favila
Philippines Leader Duterte Blasts Obama’s Meddling, Calls Him a ‘Son of a B----‘
When he won a landslide victory in May's general election,  Rodrigo Duterte vowed to crack down on criminals in an unprecedented blitz to rid the country of illegal drugs in six months.

The move has dealt a serious blow to the local drug barons and their corrupt helpers in state and police apparatuses raised the threat of a military coup to topple Duterte.

“These people, who have lost millions during this campaign, may be all too willing to get rid of the president and may already be plotting a coup despite their assurances to the contrary,” Moscow-based political scientist Vladimir Kolotov told Sputnik.

In an interview with Sputnik Russian security expert Yevgeny Mikhailov said that the Philippine president’s independent policy made him a prime target for the West, above all the United States, which wants to dominate the whole world.

“Countries plunged in anarchy and crime are easier to control. Controlled chaos is Washington’s pet tactic, so I won’t be surprised if the Americans are now trying to destabilize the Philippines and topple Duterte in order to better dominate in the Pacific region,” Mikhailov emphasized.

© REUTERS / U.S. Navy/Handout
Philippines President Seeks 'Soft Landing' in South China Sea Dispute
Vladimir Kolotov then joined in saying that “it is common knowledge that a US military presence in a country is used by Washington as a means of influencing a country’s domestic and foreign policy. In 1963 the US ousted and killed South Vietnam’s President Ngo Dinh Diem in a CIA-backed coup, in 1979 it organized the assassination of South Korean President Park Chung-hee and earlier this year tried to get rid of Turkish President Recep Tayyip Erdogan.”

The Philippines turn to Russia and China could result in a possible removal of US military bases in the country.

“This would also help restore the Philippines’ sovereign status because no country where the US maintains its military presence, can be considered as truly sovereign and independent,” Vladimir Kolotov added.