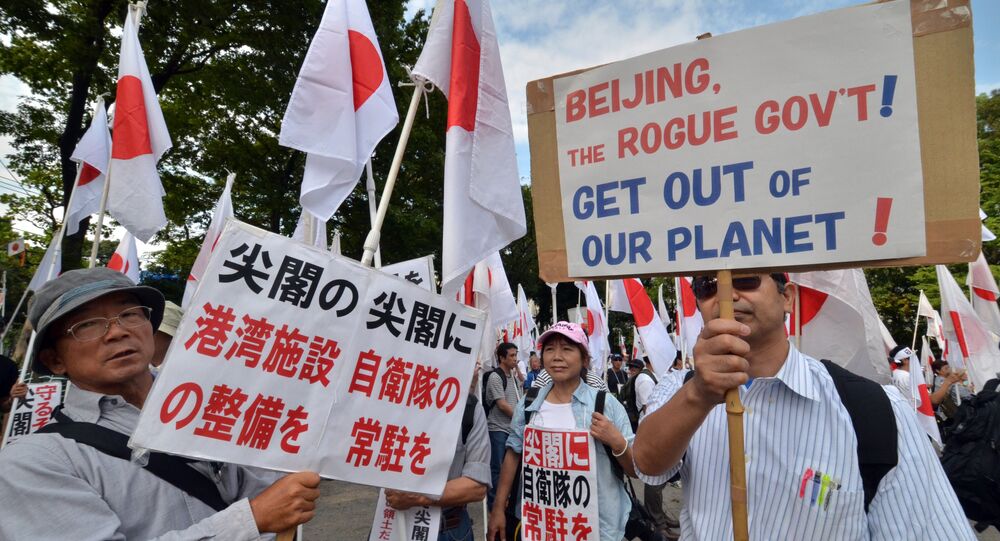 Despite the fact that China and Japan have been at peace for many decades, the two nations continue to watch each other warily, fearing a possible outbreak of war due to territorial disputes.

© AP Photo / Zha Chunming/Xinhua
Beijing Slams Japan’s Plans to Ramp up Engagement in South China Sea
A poll conducted this spring by the Pew Research Center shows that the Chinese and the Japanese still generally distrust each other and have a significant difference in opinions regarding World War II while sharing concerns about territorial disputes.

Senior researcher at the Russian Academy of Sciences (RAN) Center for Japanese Studies, Victor Pavlyatenko, told Sputnik that many Asian nations bear grudges against each other due to the past history, which is mired in frequent conflicts and mutual mistrust.

"Of course, wars were fought on all continents, but while Russians and Europeans don’t bear significant grudges, people in the East possess a different mentality and tend to remember grievances for a long time. During the post-war decades the Japanese politicians on numerous occasions apologized for the actions of the Imperial Army’s actions in many Asian countries, but every time that the relations between Tokyo and Beijing take a turn for the worse, the Chinese are keen to remind the Japanese about the past," he explained.

While the two nations’ governments continue to profess the desire to forge closer bilateral ties, and despite close economic cooperation and intensive cultural and academic exchange programs, both Chinese and Japanese tend to be reluctant to let go of the negative stereotypes of the past.

"The biggest risk factor in Asia today is a conflict between the economy and security. The volume of trade between China and Japan exceeds $300 billion, which is a pretty hefty sum, to put it mildly. Therefore, I believe that both nations are perfectly aware of the fact that the disputed islands aren’t worth starting a fight, as losses would be far greater than potential gains," Pavlyatenko remarked.

It should also be noted that according to another Pew Research Center poll conducted in 2015, 91 percent of Philippine respondents, 83 percent of Vietnamese respondents and 78 percent of South Korean respondents expressed concerns that China’s territorial claims in the South China Sea may result in an armed conflict.