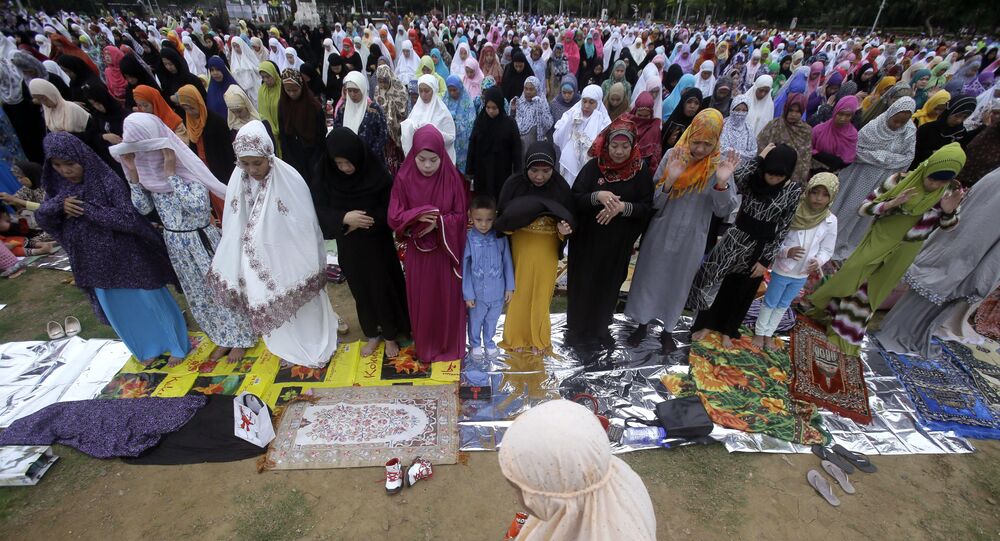 Muslims in the Philippines have expressed deep concern over reports of a pledge made by a provincial town mayor to force thousands of Muslim residents out of the settlement, as part of his campaign to counter drug trafficking.

On Monday, the Manila Times reported that Amadeo Gregorio Perez, the mayor of the town of Urdaneta, in the Pangasinan province, has blamed all drug-trafficking in the region on Muslims, and ordered every adherent to that faith to leave the area. He has given them three weeks.

© Flickr / MattysFlicks
The Psychology of Humanizing Evil: Latest Daesh Recruitment Strategy is Nothing New
Delivering at a flag-raising ceremony on Monday, the mayor cited a report from the Philippine Drug Enforcement Agency (PDEA) making the claim that 84 percent of the over 5,000 Muslims who reside in the area are engaged in drug smuggling.

The mayor stated that most crime in the area, whether murder, robbery, rape or assassination, is linked to drug dealers.

As a solution to the problem, Perez told local authorities to ban Muslims from entering the urban area. He also ordered non-Muslim property owners in Urdaneta who rent living or business space to Muslims to evict them.

Urdaneta’s local economy is heavily dependent on businesses run by Muslims, with some 400 dry goods stalls, and other distribution and retail establishments, dispersed across the city. The mayor has declared, however, that a banishment of the entire religious community, including families with women and children, is essential “to stop the proliferation of illegal drugs here.”

Among obstacles to the realization of Perez’s plans are that some 3,000 Muslims legally reside in the area and many are employed in local government.

© AP Photo / LM Otero
Family of Texas ‘Clock Boy’ Sues Over ‘Severely Traumatic’ Arrest
Responding to the news, the governor of the Autonomous Region in Muslim Mindanao, Mujiv Hataman, said he “would like to believe that this isn't true, because this is nothing but discrimination.” Hataman observed that the evidence offered by the small town mayor is absurd, and pointed out that expelling the entire Muslim community from the area will not end crime.

“[These are] mindless acts that are clearly prejudiced against our Muslim brothers and sisters, especially when these violate their constitutionally protected and fundamental human rights, including their right to life and liberty, to be secure in their persons, and to freely practice their religion as Filipinos of faith,” Interaksyon cited Hataman saying.