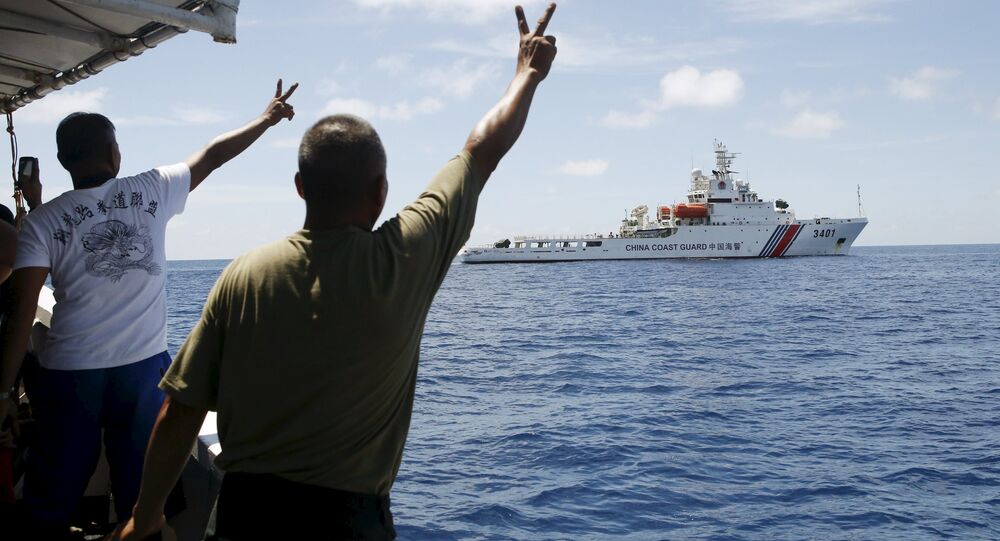 The parties to the South China Sea dispute could be moving closer to an agreement, despite last week's ruling from a court of arbitration in The Hague, which was rejected by China.

© REUTERS / U.S. Navy/Handout
How China May Come Out on Top After the Hague Ruling on South China Sea
On Tuesday China's Xinhua news agency reiterated Beijing's intention to disregard the South China Sea ruling handed down by the Permanent Court of Arbitration at The Hague on July 12.

The Hague ruled in favor of the Philippines, which brought the case to arbitration in 2013. The court declared that China has no legal basis for claiming historic rights to resources within the South China Sea's nine-dash line, which has been used by Beijing to stake its claim on most of the sea territory.

Xinhua repeated Beijing's assertion that the Permanent Court of Arbitration has no jurisdiction in the dispute, and said the ruling was made by "biased arbitrators."

Beijing has offered to hold bilateral talks with Manila and other parties to the dispute, "outside of and in disregard" of the tribunal ruling.

While the offer was publicly rejected by the Philippines, Philippine Foreign Minister Perfecto Yasay told the TV network ABS-CBN that the country is open to some form of negotiation.

Chinese officials in Beijing dismissed any suggestion that trade between the Philippines and China, worth US$22.3 billion in the first six months of 2016, would be affected by the dispute.

Pivot in the Philippines

In May Rodrigo Duterte was elected Philippine president, and his election also raised uncertainty about future Philippine policy toward China and its longtime ally the United States.

On July 9, Duterte made a televised speech in which he condemned the US for its role in the rise of terrorism in the Middle East, as well as Western foreign policy in general.

© AFP 2021 / STR
Amid Chinese Military Drills, Admiral Warns of 'Disaster' for US Patrols in South China Sea
Writing in The National Interest on Saturday, analyst Dean Cheng pointed out that one of the new President's first actions in the wake of the PCA decision was to ask former President Fidel Ramos to visit Beijing to initiate talks.

"While the establishment of high level communications between Manila and Beijing is important, it remains to be seen what the nature of such discussions will entail. If President Duterte chooses to make concessions to Beijing, in light of the tribunal’s findings, this would lower tensions, but also raise real questions about the prospect of US-Philippine cooperation," Cheng wrote.

Prior to the tribunal ruling, Dr. John Short, a political analyst and Professor of Public Policy at the University of Maryland, told Radio Sputnik that since China has long rejected The Hague's jurisdiction, the Philippines would be better served by entering into negotiation.

"If they take part in bilateral negotiations with China they can advance their claim, and maybe get a much better territorial outcome," Short said.

On Wednesday ecologists told the science journal Nature that while the arbitration ruling has increased tensions related to the immediate future, it many result in more cooperation between all parties.

John McManus, a marine ecologist at the University of Miami in Florida raised concerns that China and the Philippines will respond to the ruling by increasing their fishing industries in an area where stocks are declining.

"Now catastrophe looks much closer than before," McManus said.

"The Hague decision stirred the pot."

© AP Photo / Zha Chunming
Tokyo Provokes Beijing, Demands Adherence to the South China Sea Ruling
David Cyranoski pointed out that the region's scientists already collaborate, and Zhifei Liu from Tongji University in Shanghai said that the international project he leads, which studies how sediment is deposited and transported in the South China Sea, will be unaffected by the ruling.

"Scientific interest and environmental objectives in the area could strengthen diplomacy, by giving adversaries a reason to sit down and iron out priorities of mutual interest," Cyranoski wrote.

The South China Sea is a highly contested region through which nearly $5 trillion in international trade passes annually. In addition to China and the Philippines, overlapping claims are also made by Vietnam, Indonesia, Taiwan, and Brunei.

Many of the countries make claims on oil and gas reserves in the area, and millions of ordinary people still earn their livelihood from fishing in the South China Sea.