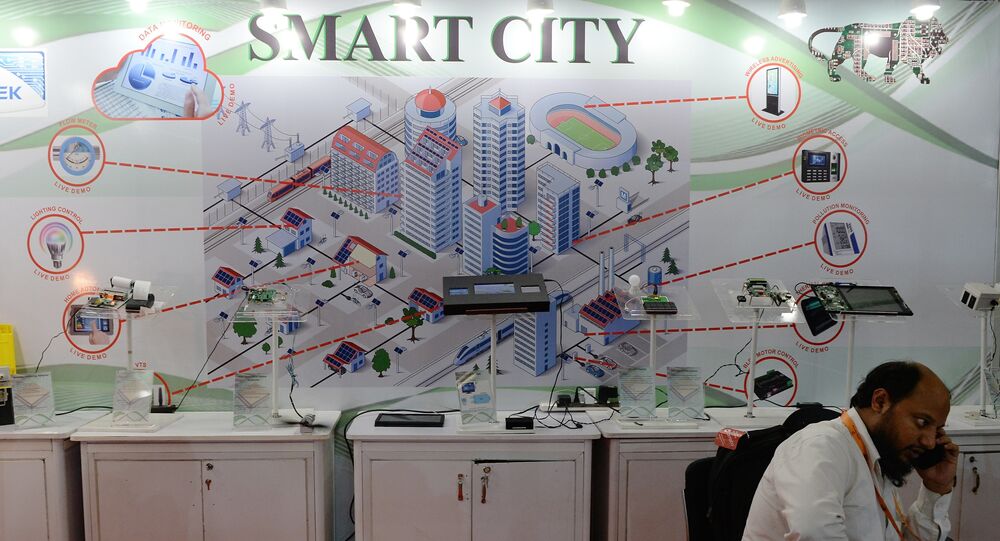 India's Smart City Mission is on fast-track mode, presenting a flurry of opportunities for multi-lateral institutions like the World Bank and the BRICS Bank.

© AFP 2021 / ATTA KENARE
India Ready to Invest $20Bln in Development of Iran's Chabahar Port
New Delhi (Sputnik) – India has identified 13 more cities for its Smart City Mission, opening the floodgates of opportunity for local as well as foreign investors. The project plans to attract Foreign Direct Investment (FDI) of up to 100 percent. For the 33 cities identified so far, an estimated investment of $15 billion is required to fast track projects that are either already underway or are to be launched soon.

LIVE: #SmartCity Development will benefit 13 crore people, which is one third of the total urban population: @MVenkaiahNaidu

The ADB has in principle agreed to extend a loan of $1 billion while the World Bank is willing to extend a loan of half a billion dollars for the implementation of the Smart City Mission. The BRICS Development Bank is also keen to support the project.

Sudhir Krishna, Chairman, Delhi Finance Commission & Former Secretary, Urban Development Ministry, says, "Multilateral institutions can provide technical assistance and bring in best practices across the world. They can help in preparing bankable projects like water supply or solid waste management. They can also help in capacity building to the management of the future smart cities."Krishna opines that money is not a problem but rather management is the biggest challenge. Krishna will play a major role in making the New Delhi Municipal Corporation (NDMC) area into a smart city. NDMC was selected in the initial round of 20 cities which are going to become smart cities.Next month, most of the cities selected in the first round of the process are likely to launch affordable housing schemes, 24x7 water supply projects, sewage treatment plants, transport projects, smart street lighting, roof top mounted solar paneling, solid waste management and waste water recycling projects.

The Indian government has set a target to build 100 smart cities across the country. Interestingly, there are no defined criteria for a place to be called 'smart city.' It is up to the local management; what kind of city they want with their financial capabilities. They simply have to follow certain norms which will be environment friendly.

Chandigarh finally included in Smart City list. Their proposal included a ban on Roadies auditions in the city.

India Turns to FBI for Help in Pathankot Investigation