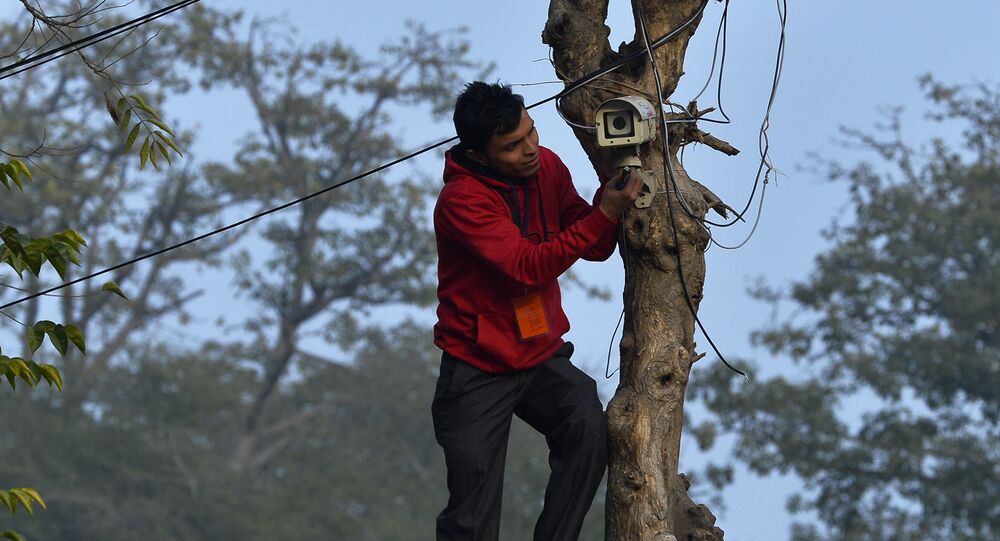 In a reversal of roles, criminals are now using CCTV cameras to monitor the movement of cops in order to avoid being caught.

New Delhi (Sputnik) — Criminals in India are becoming more tech savvy in a bid to outsmart police. In Delhi, criminals have installed CCTV cameras to monitor the movement of local cops. This new phenomena has baffled the Delhi Police.

© AFP 2020 / INDRANIL MUKHERJEE
Draw the Line: Indian Government to Fine and Jail Owners of Incorrect Maps
The Delhi Police have their own network of CCTV cameras to monitor law and order in the capital. In fact, recently more CCTV cameras have been installed in Delhi to keep the movement of criminals under close watch. However, the criminals' methods are evolving to the chagrin of Delhi Police, and now criminals have also installed CCTV cameras around their hideouts to keep a tab on any movement of cops in their areas.

Delhi Police faced such an incident in Vasant Gaon and Sangam Vihar in South Delhi, where a gambling racket has been operating. Whenever police conducted a raid in the area, however, they found nothing. Later Delhi Police were tipped off that the criminals had installed CCTV cameras at the entrance of the area and whenever they conducted  the raid at the criminal's hideout, the crooks were alerted by their own CCTV system.

"We had been getting inputs that criminals are indulging in illegal operations in these areas, but due to the CCTV camera they came to know our movements and escaped in the nick of time," Rajan Bhagat, Assistant Commissioner of Police and Spokesperson of the Delhi Police told Sputnik.

After understanding the modus operandi of the criminals, however, the Delhi Police busted several illegal operations in various localities throughout South Delhi. Now the Delhi Police have also activated its intelligence units to gather more information on these trends in other parts of Delhi.