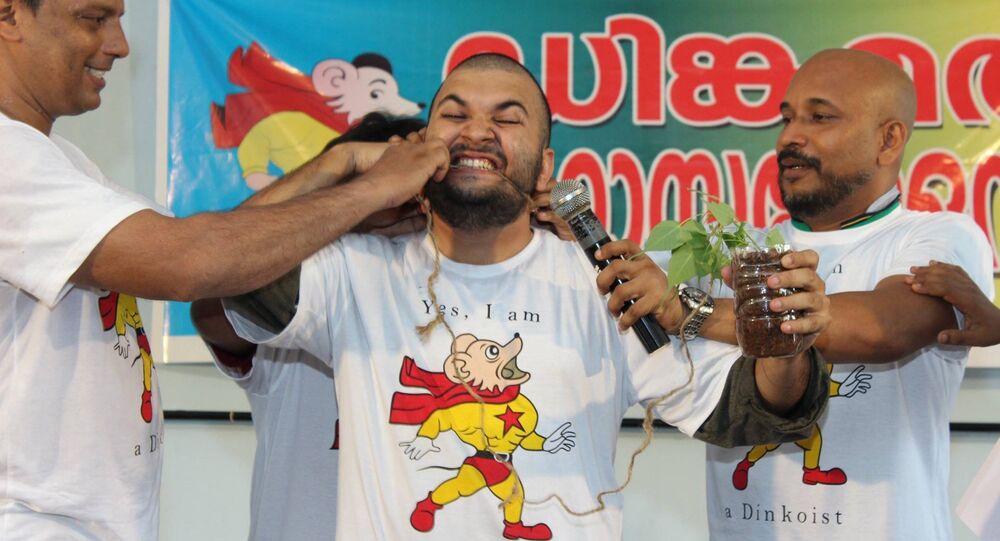 If you thought mice were just rodents, then think again. Here's India's brand new religion, whose followers believe that Dinkan, the mouse messiah, is the creator of the universe.

Dinkoism has its roots in the southern Indian state of Kerala and its aim is to mock all other religions. Yet, the self-declared Dinkoists, in a stern voice to appear serious, firmly deny they are a spoof religion.

Sukesh Vadavil, spokesperson for the Mooshikasena (meaning mouse army), told Sputnik: "In our belief, Dinkan is the God who created this world. He is also the one who keeps the world as it is now. And, we believe Dinkoism is the most suitable religion for the modern age. This is the belief part."

"But, when it comes to the values and lifestyle of Dinkoism, we're a scientific religion and we're truly a region that values human rights and all the modern-day values that a religion should have."

Vadavil lists values such as animal rights, gender equality and freedom of speech as the nucleus of the belief. When asked if an individual is recognized as a Dinkoist if he or she adheres to all those values but reject the idea of mouse God of Dinkan, he gave a resounding affirmation.

The fictional mouse named Dinkan was based on a cartoon character from a children's magazine. The magazine, known as Balamangalam, also serves as one of the holy books of the Dinkoists.

Another core principle of the Dinkoists is to make satire of all other religious groups.

As part of spreading their religious beliefs, they are also set to distribute underwear, printed with the images of Dinkan mouse, in Kerala.

The followers are determined to make the campaign a huge success. The event, known as Akshaya Jetteeya, will take place on May 8-9 and will bring prosperity to anyone who buys the undergarments, according to Dinkoists' belief.

"In four locations — Palakkad, Ernakulam, Kozhikode, and Thalassery — we will sell actual underwear to people. As per Dinkoists' belief, if you purchase the underwear during those auspicious days, you will be getting a year full of prosperity and good life." Sukesh Vadavil added.