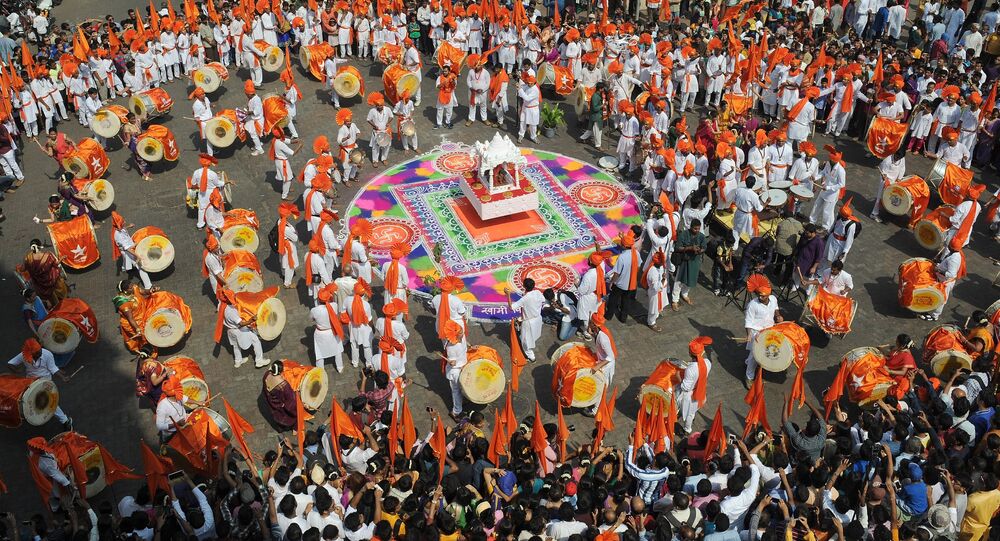 The Hindu New Year is being celebrated in India, marking the end of winter and the first day of spring.

New Year's Day in the traditional Hindu calendar based on the beginning of the new moon is being celebrated in India and by the Indian diaspora around the world.

Known by various names, Chaitra Sukladi, Gudi Padwa, Ugadi, Cheti Chand, Navreh and Sajibu Cheiraoba, different states across the nation are celebrating the holiday in their own way.

Cheti Chand is an important festival celebrated as New Year's Day by Sindhi people of India. The most traditional and prevalent custom on this occasion is Chaliho Sahib — the ritual of worshiping water, which is considered the elixir of life. After forty days of Chaliho people celebrate with a festivity which somewhat resembles Thanksgiving Day. Another major tradition observed on this day is Baharana Sahib — the public procession to a nearby river or lake, where the participants perform a traditional folk dance "Chhej" and leave an offering to Jal Devata, the god of water.

Gudi Padwa and Ugadi is one of the most famous harvesting festivals in India. On the festive day people take the time out to do some spring cleaning. Women and children work on intricate rangoli designs on their doorsteps — colorful floral drawings. They decorate the entrance of their houses with fresh mango leaves, which brings a good crop and general well-being, according to legend. Everyone dresses up in new clothes and it is a time for family gatherings. Traditionally people begin the festivities by eating the bittersweet leaves of the neem tree. It is believed to purify the blood and strengthen the body's immune system against diseases. People perform the ritualistic worship to god, pray for their health, wealth, prosperity and success.

On Navreh people visit the Hari Parbhat hill to seek goddess Sharika's blessings. People, who celebrate Sajibu Cheiraoba, climb the nearest hill tops; in the belief that it would elevate them to greater heights in their worldly life.

Greetings to people across India celebrating the advent of the New Year. May this new year bring joy & prosperity. pic.twitter.com/SHuKbQ1xAA