A vacationing South African teenager has found a part of a Boeing 777 jet wing that may have belonged to Malaysia Airlines Flight 370, potentially giving investigators another piece of the puzzle.

© AP Photo / Joshua Paul
Malaysian Investigators: Years of Search for Disappeared MH370 End With No Results
The teen, Liam Lotter, was strolling along a beach in southern Mozambique on December 30 when he saw the 3.3-foot-long and a little over a foot-and-a-half-wide debris in the sand. After noticing rivet holes and the number 676EB stamped on it, the 18-year-old was certain he had found a piece of an airplane, and dragged the heavy and waterlogged debris back to his family’s vacation home near the resort town of Xai Xai.

Initially, Lotter’s parents assumed it was a piece of a boat, and discarded his find as a “piece of rubbish.” Undeterred, Lotter insisted the family bring it back to South Africa to investigate further.

"He was adamant he wanted to bring it home because it had a number on it," said his father, Casper Lotter. "It just grabbed him for some weird reason.”

When they returned home, the item was nearly forgotten, and his mother at one point attempted to throw it out. That changed however, when Lotter heard about another possible piece of the plane being discovered approximately 186 miles from where he found the wing.

"I was very shocked — Mozambique, similar color, similar area," the teen said of the piece discovered by an American man. "He described it similarly to what I'm looking at right now." 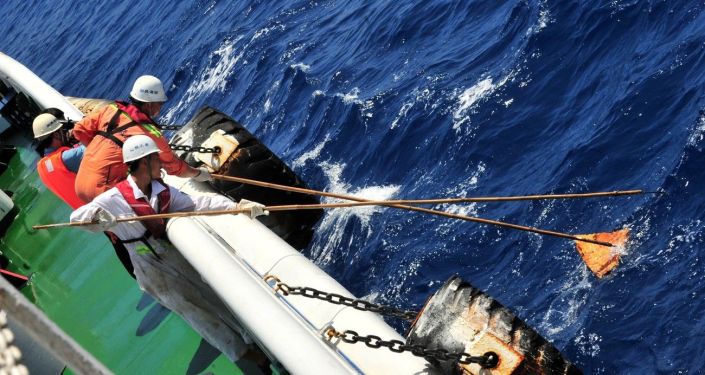 © East News / Xinhua/Zhao Yingquan
Fragments of Disappeared Malaysian MH370 Jet 'Likely to Be Found by July'
After learning of the similar part, his mother contacted Australian aviation authorities to provide them with the number on the part — which they said indicates it may belong to a Boeing 777.

"We have arranged for collection of the part, which will be sent to Australia as they are the ones appointed by Malaysia to identify parts found," Kabelo Ledwaba, spokesman for the South African Civil Aviation Authority, said.

The teen is not an aviation enthusiast, making it that much more intriguing that he was so compelled to investigate. He hopes that his find will inspire others who may have found debris that could be from the plane to provide them to authorities, and that the families of those lost aboard the plane "know that we're finding evidence, finding out how it happened, where it happened, just to give them some closure."