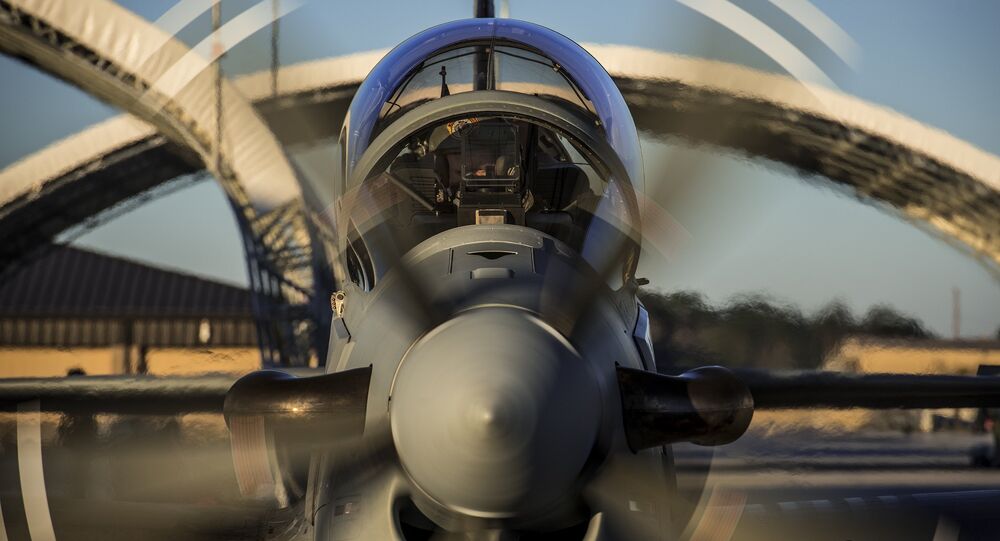 The A-29 turboprop attack aircraft may play an important role in helping the Afghan Army destroy the Taliban, according to the military news website warisboring.com.

© AFP 2021 / Noorullah Shirzada
Daesh vs. Taliban: Afghanistan Between Devil and Deep Blue Sea
Despite having some hurdles to overcome, the Afghan Air Force's use of A-29 turboprop attack aircraft may add significantly to the country's military getting the better of the Taliban, journalist Joseph Trevithick wrote in an article for the military news website warisboring.com.

He recalled that four such planes touched down at Hamid Karzai International Airport in Afghanistan on January 15, in an event that Trevithick touted as a "major milestone."

He also recalled that the A-29, a version of the Embraer EMB-314 Super Tucano, can be described as a "light, flexible turboprop that serves as a trainer and supports troops on the ground."

In this context, Trevithick quoted US Air Force Colonel Michael Pietrucha as saying that light-attack planes like the A-29 are especially relevant when it comes to "counter-insurgent warfare."

"The A-29 is relatively easy to maintain, rugged, massively fuel efficient compared to jets, and has pretty decent endurance," Pietrucha said.

Touching on the plane's characteristics, Trevithick in turn said that the single-engine Super Tucano has a maximum speed of about 370 miles per hour and a range of almost 700 miles while carrying more than 3,000 pounds of weaponry.

"The plane has a 50-caliber machine gun in each wing and can carry a variety of bombs, rockets and gun pods. To help spot targets, the aircraft have powerful cameras that work in poor weather or at night," Trevithick said.

He added that the deployment of this "very good plane" in Afghanistan is being done just in time, given that the US-led coalition in the country "draws down", and "the aerial support it provides to Kabul's forces will eventually leave as well."

“This WWII-Era Plane is Heading for War — A-29 Super Tucano — YouTube” https://t.co/hUs2CHgqmq

In this vein, Trevithick cited an Afghan air force public affairs officer, referred to only as Col. Bahadur, as saying that the A-19 "will destroy the centers of enemies in the country," and that the plane will also "provide security and combat support from the ground units in ground operation."

"With the new A-29s, the Afghan air force hopes to take an important step toward plugging this dangerous gap," Trevithick pointed out.

Paradoxically the biggest problem pertaining to using the A-29 planes against Taliban militants is the Afghan Air Force itself, according to Trevithick.

He recalled that despite Kabul's air arm numbering about 6,700 people, the service only had around 160 trained pilots by December 2015.

Again, Trevithick quoted Colonel Michael Pietrucha as saying that "the biggest challenge… will be finding and training individuals with sufficient education to build a modern air force, pretty much from the ground up."

© AP Photo / Rahmat Gul
Forever War: After 14 Years of US Combat in Afghanistan, Taliban Gains Ground
Another trouble is maintaining the planes, Trevithick said, adding that the Pentagon has repeatedly warned of "the inability of Afghan mechanics to keep various types of equipment running due to a lack of spare parts, poor training and other complications."

He concluded by saying that despite a spate of problems, Kabul should be quick about putting the A-29 aircraft into service.

"…With the Taliban stepping up their attacks on major urban centers like Kunduz and a rare winter offensive in progress, the A-29s will have to be ready to go consistently to have any serious impact on the fighting," Trevithick said.

Some 60 Taliban Fighters Killed in Afghanistan in One Day