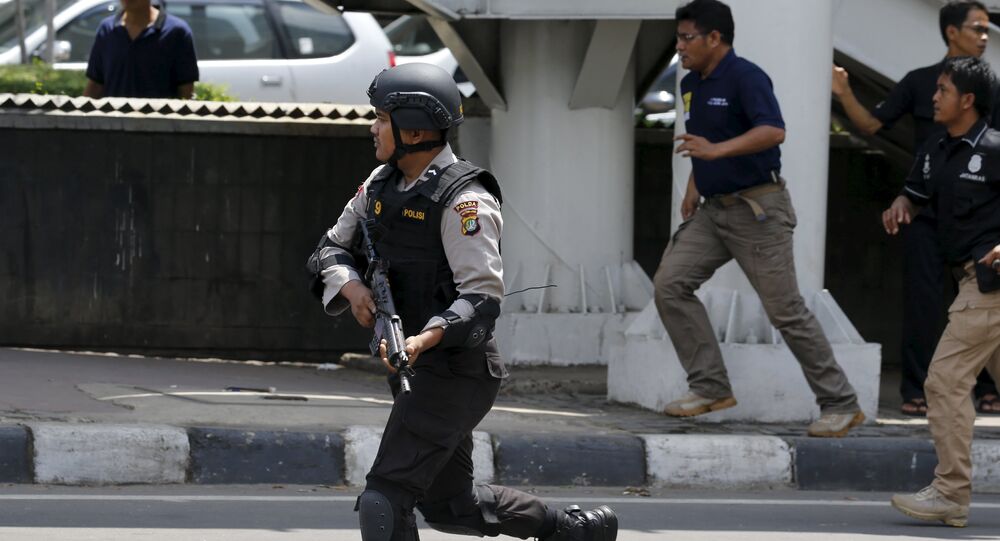 Police in Indonesia arrested three suspected Daesh fighters one day after a series of explosions that have killed at least seven and injured nearly 30 people in Jakarta, officials told local media Friday.

MOSCOW (Sputnik) – A Daesh flag was found at one of the six sites where a series of blasts occurred in the Indonesian capital on Thursday in addition to the three arrests, Jakarta police headquarters spokesman Insp. Gen. Anton Charliyan said, according to the Kompas daily.

© REUTERS / Garry Lotulung
Indonesian FM Visits People Injured in Jakarta Blasts
The names of those detained provided by the outlet were Saiful, 40, Isro, 35, and Sudirman, 30.

The arrests were made in the city of Depok, on Jakarta’s southern border, on a tip that the three had "threatened a woman to join the group," the city’s police chief told the newspaper.

Daesh, a jihadist group outlawed in countries including Russia and the United States, claimed responsibility for Thursday’s blasts.

Five of the seven casualties are reported to be the gunmen, who were said to have carried out the attacks on motorcycles, wearing suicide belts and armed with assault rifles.