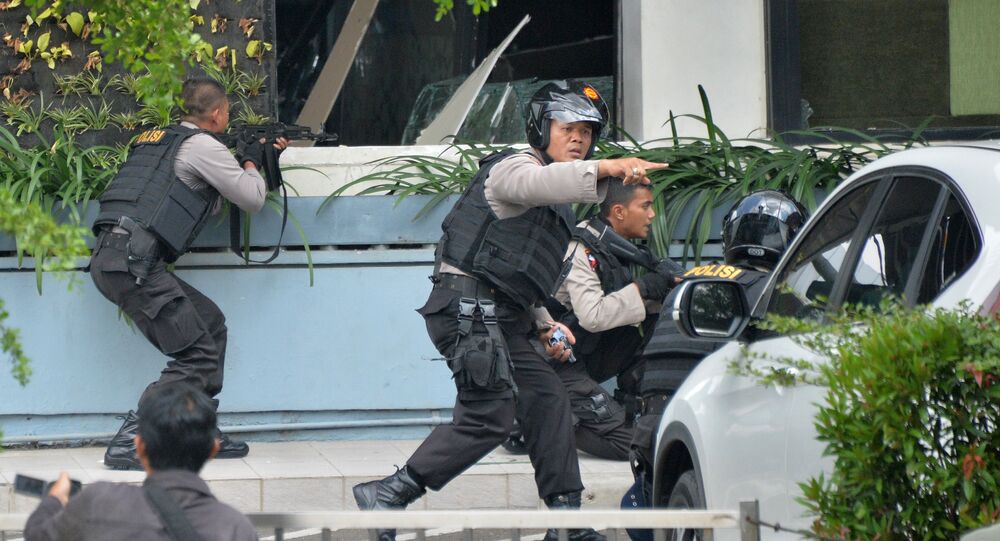 According to a Jakarta police spokesman, there is a high chance that Daesh (the Islamic State) are involved in the series of terror attacks across the Indonesian capital.

BALI (Indonesia), (Sputnik) – It is highly probable that the Daesh jihadist group was involved in explosions in Indonesia’s Jakarta, police spokesman Budi Gunawan said Thursday, as cited by the local media.

"It was most probably conducted by the Daesh," Gunawan said, as quoted by the Detik news outlet.

At least 10 people were killed in a series of explosions in the Indonesian capital after several assailants entered the downtown area on motorcycles, carrying rifles and explosives.

© REUTERS / Beawiharta
Daesh Threatened Indonesia With Attacks Prior to Jakarta Blasts
Head of the Department of Public Relations of Jakarta’s Metropolitan Police Muhammad Iqbal said the situation in the city had been normalized, the media reported.

"Four of the assailants have been neutralized, the situation in the area (of the attacks) is calm," Iqbal said, as quoted by the news outlet.

Earlier on Thursday, President of Indonesia Joko Widodo called the incident an act of terrorism.

Daesh is outlawed in a number of countries, including the United States and Russia.

Starbucks Shuts All Jakarta Coffee Shops After Series of Explosions