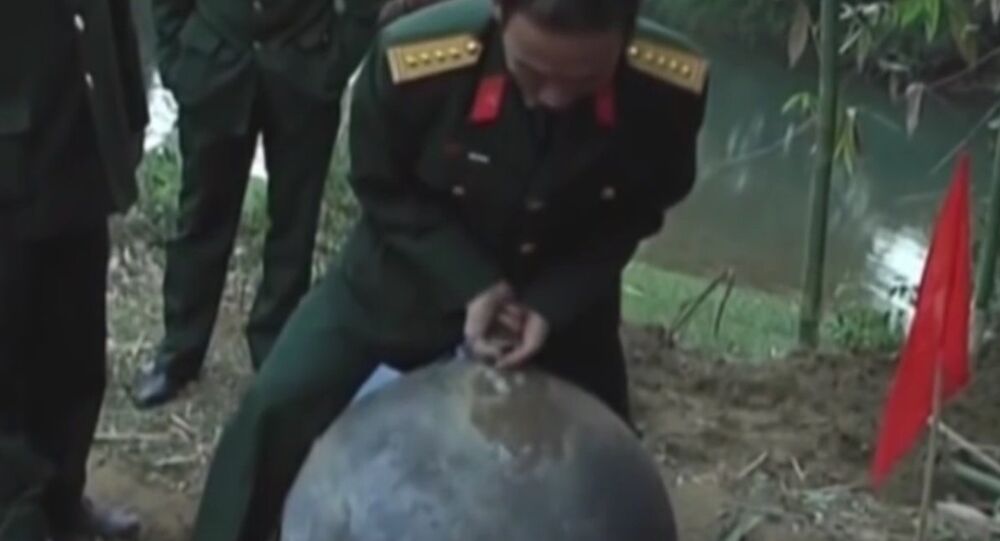 Mysterious Metal 'Space Balls' Crash Down Out of Sky Onto Vietnam

Vietnamese authorities are puzzling over three metal spheres that allegedly came from space and landed on the territory of the country, causing turmoil among local residents.

​​Vietnam’s defense ministry launched a probe into the appearance of the unidentified metal balls in the country’s north, AFP reported.

The balls, which weigh a half-pound, 13 pounds, and roughly a hundred pounds respectively, were all found in different locations. The smallest one crashed on a roof, not harming anyone, while the two others fell near a stream and in a maize field, according to media reports.

​The occurrence has scared local residents, who claimed the sound of the falling balls reminded them of a thunder, according to media reports.

© Flickr / Wilson Lam
Social Media Explodes After Mysterious Blast Heard Across the US Midwest
Tuan said that the objects apparently came from the sky, underscoring that they cannot be referred to as state military arms.

"Before and after these objects were discovered, the Vietnamese army was not conducting any military activity in the region," Tuan said.

Initial assessments by investigators revealed that the spheres were "specialized compressed air tanks," allegedly from a missile or a spaceship, according to the CBC.

BBC reported that the balls were originally crafted in Russia, but could have been used by other states.

Nguyen Khoa Son, an expert working on the Vietnamese space program, suggested in an interview with local media that the balls may have landed on the country’s soil as a result of a failed satellite launch. Taking into account the intactness of the objects, he pointed out, it can be concluded that they may have fallen from an altitude of less than 62 miles.

According to Uproxx, no satellite launches were conducted at the time when the balls fell.

Vietnam’s military has promised to make public the results of the investigation into the incident.