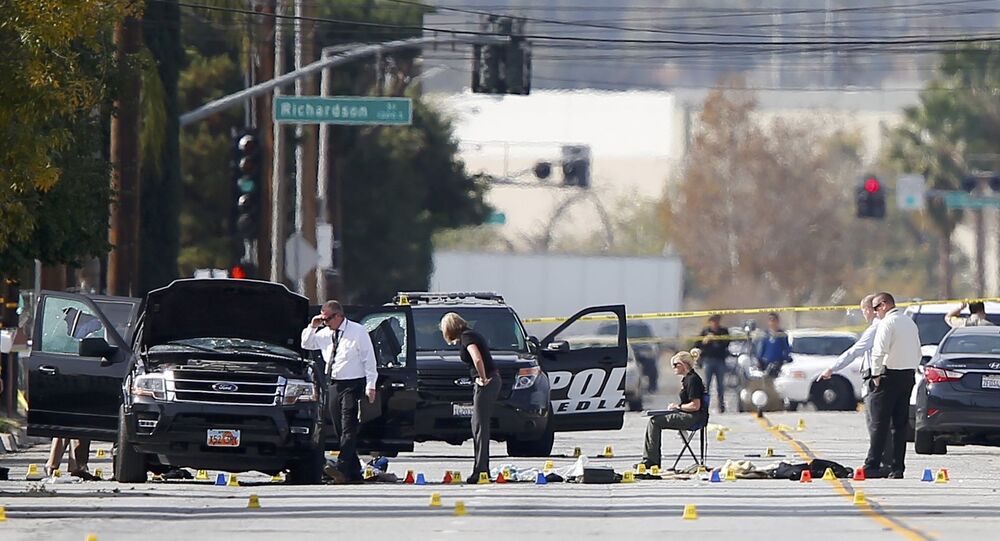 Not-Free Press: Journos Stopped From Investigating US Shooters in Pakistan

Western journalists appear to be forbidden from doing their job in Pakistan, as the country’s officials reportedly fear any investigations into the real reasons behind an attack in San Bernardino that took the lives of 14 people at the hands of a Pakistani couple.

© REUTERS / Mario Anzuoni
San Bernardino Female Shooter Pledged Allegiance to Daesh Leader - Reports
Reporters have been visiting the city of Multan in the Pakistani province of Punjab to probe into the life of Pakistani Syed Rizwan Farooq, one of the San Bernardino terrorists, claiming that they have been stuck in a hotel without any permission to go out.

Washington Post correspondents came to what is believed to be the epicenter of Sunni extremism after it emerged that Chicago-born Pakistani-American Farooq may have followed his wife, student Tashfeen Malik, to the US.

Craig, by putting "officials" in quotes, confirmed the widespread belief that they are mostly from Pakistani Inter-Services Intelligence, ISI, whose staff is accused by foreign reporters for restraining them from getting closer to the truth. In this case, the truth is that Multan and neighboring Punjabi areas are the epicenter of state sponsored Sunni extremism.

​The country's intelligence service has quite a bad reputation in "welcoming" foreign correspondents as they used harsh methods towards New York Time's female journalist Carlotta Gall after the publication of her book in which she revealed that ISI sheltered Bin Laden. Daniel Pearl's murder has been also used by the ISI as an example of consequences western journalists should be aware of before coming to investigate the dangerous Southern Punjab region.

Pakistani media also reported about the region's radicalization that has been supported by Saudi Wahhabi ideology and funds.

"On one hand officials say Tashfeen Malik wasn't radicalized here in Multan, yet on other hand they say 'it's too dangerous' for foreigners," Craig tweeted, adding, "I've lost track of how many different security/intel officials I've had to talk to, copy my passport, etc in past 17 hours — think 12 to 16."

Malik's family allegedly has roots in the Punjabi area where they had political weight and ties with some local extremists. They moved to Saudi Arabia when Tashfeen was four, however, she came back to her native town frequently. She returned to Multan to study pharmacy in 2007, at a time when there was a Lal Masjid Operation break-up by the Musharraf government in Islamabad against extremists who later swore revenge. This is still a question whether the government-led operation influenced Tashfeen's radicalization.

The question remains as to whether Tashfeen entrapped her husband or not as Farook seemed to be moderate, according to one of his colleagues who said "he married a terrorist". The reports have mounted claiming she was the initiator of the shooting in San Bernardino while he hesitated to open fire in the assault that resulted in 14 deaths and 21 people being wounded.

Later media reports claimed that Farook and Malik had contacts with Islamist organizations, including the al-Qaeda-affiliated Nusra Front and the IS (Daesh in the Arab world), which is outlawed in many countries including Russia.