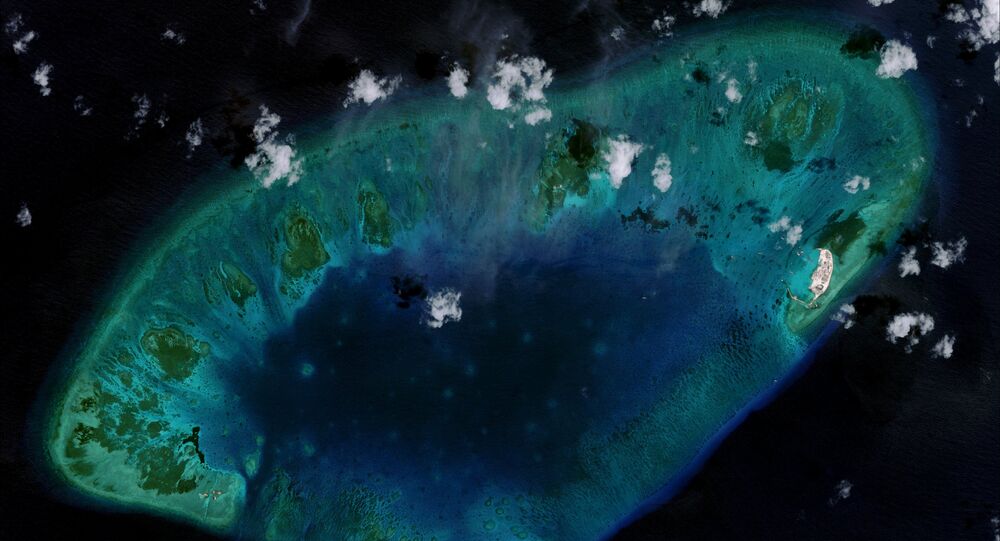 Japan is meddling in the South China Sea although it has no territorial claims in the region to divert Beijing's attention and resources from the Diaoyu (Senkaku) Islands and shed Tokyo's post-WWII pacifism, Xinhua news agency reported.

These are the two primary reasons for "muddying the waters in the South China Sea," the media outlet noted. Not only are these aspirations unrealistic, more importantly they are a miscalculation, which will certainly fuel mistrust between the two leading Asian economies.

"This seemingly clever maneuver is only short-sighted, for Beijing will probably not be convinced next time when Tokyo says it sincerely wants to improve bilateral ties," Wang Haiqing wrote in an opinion piece for Xinhua.

© AP Photo / Ritchie B. Tongo
Hanging by a Thread: China Urges Japan to Halt Provocative Actions Amid Relations’ Thaw
The Diaoyu Islands in the East China Sea are claimed by China but occupied by Japan.

The Japanese Maritime Self-Defense Force and the Philippine Navy are taking part in the two-day drills on an island not far from the Spratly Islands, a hotly contested archipelago in the South China Sea. A Japanese patrol aircraft will allegedly fly over the area later this week.

Beijing considers most part of the South China Sea its own territory but Brunei, Malaysia, Taiwan, the Philippines and Vietnam have made their claims over this part of the Pacific Ocean. Japan is not a party to the dispute.

© AFP 2021 / POOL
An aerial photo shows Thitu Island, part of the disputed Spratly group of islands, in the South China Sea located off the coast of western Philippines on July 20, 2011

Japan has long struggled with its pacifist constitution, with Shinzo Abe trying to find a loophole to expand the powers of the military. Apparently, there is no better way to achieve this goal than to find a foreign, preferably powerful enemy or create an image thereof.

Tokyo tries to "portray China as a bully in the South China Sea" to create favorable conditions and the right atmosphere "for the adoption of a new package of security bills which will significantly expand the scope of overseas operations by the country's self-defense forces," Wang Haiqing noted.

There is a third reason for Japan's interest in the South China Sea. "Tokyo also aims to divert increasingly intensive global attention on Japan's lack of remorse over its atrocities during World War II (WWII), nearly 70 years after its surrender," the article concluded.