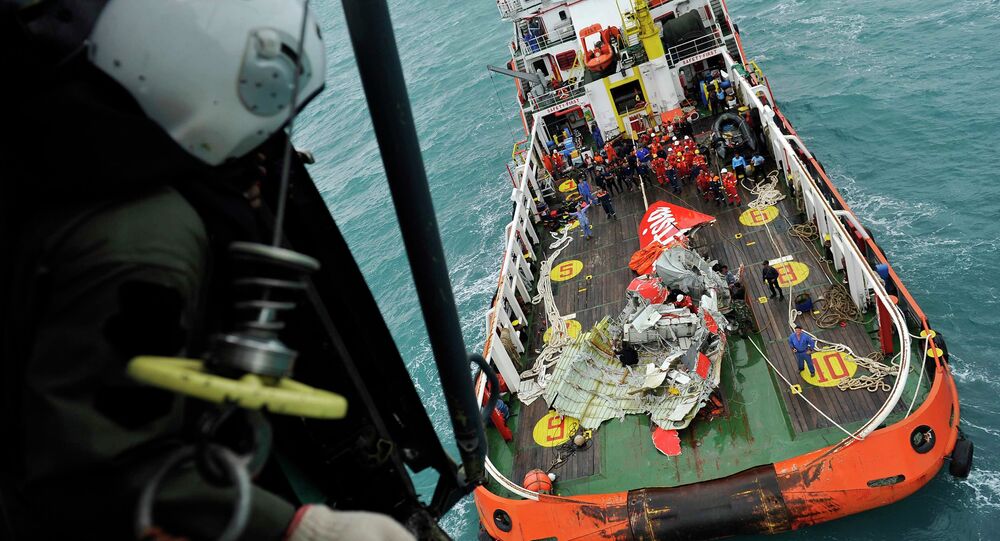 Indonesian salvage teams have resumed efforts on Monday to raise the wreck of the AirAsia passenger jet that went missing over the Java Sea late last year, the AirAsia carrier reports on its Facebook page.

© REUTERS / Pius Erlangga
Indonesian Rescue Teams Attempt to Raise AirAsia Flight QZ8501 Fuselage
MOSCOW, January 26, (Sputnik) — Rescue ships are at the site of the crash as divers are prepping the cables attached to the fuselage and flotation bags to be used to bring up the remains of the crashed jetliner. A strong underwater current is hampering the salvage effort.

The statement also says that Indonesian police investigators have identified the bodies of two passengers of AirAsia Flight QZ8501, Wanti Setiawati and Djarot Biantoro, and have handed them to the bereaved families.

An earlier attempt on Saturday to bring up the main section of the plane, believed to contain most of the dead bodies, was declared a failure.

© REUTERS / Prasetyo Utomo/Pool
Divers Found Six Bodies Belted in Seats at AirAsia Crash Site
Flight QZ8501 went down on December 28 in stormy weather, during a short trip from the Indonesian city of Surabaya to Singapore, less than an hour after takeoff without sending out a distress signal. All 162 passengers and crew on board, most of them Indonesian nationals, perished. Indonesian authorities later reported finding a number of dead bodies and parts of the plane floating off the Borneo coast.

Seventy bodies have been recovered so far, with the rest believed to be trapped inside the wreckage of the crashed Airbus A320-200.