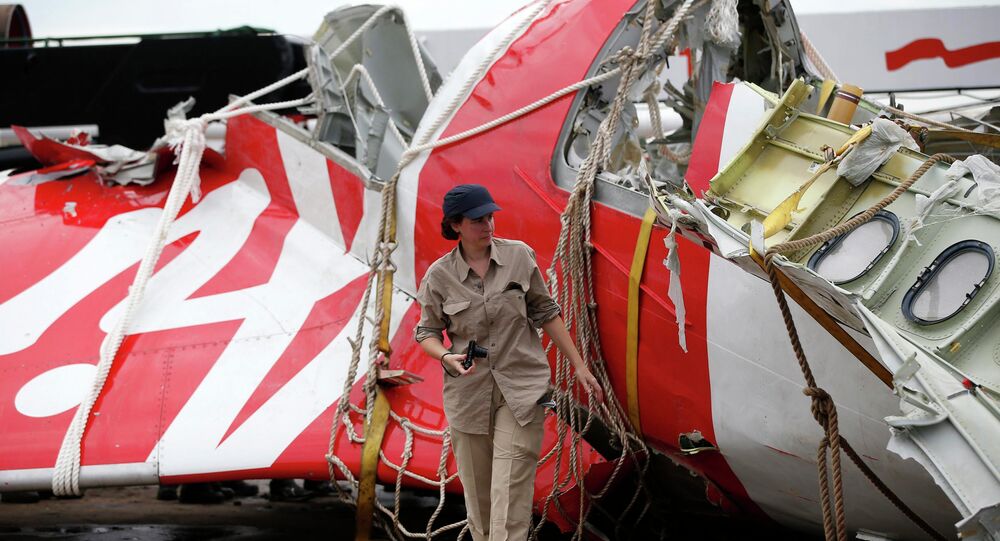 The boxes were retrieved from the Java Sea last week. The recordings didn’t contain any voices except those of pilots, making the version of the terrorist attack highly unlikely.

© AFP 2021 / POOL / ADEK BERRY
Singapore Quits AirAsia Flight Rescue Operation in Java Sea
MOSCOW, January 20 (Sputnik) — The voice recorders of AirAsia Flight QZ8501, recovered from the bottom of the Java Sea, do not contain any evidence that the plane crashed as a result of a terrorist attack, CCN reported on Tuesday.

No strange voices or sounds of explosion are heard in the audio recordings. There are also no threats or other noises, except the voices of the flight crew.

"The voice from the cockpit does not show any sign of a terrorist attack. It is only the pilot, sounding very busy," Andreas Hananto, a representative of Indonesia's National Transportation Safety Committee, told Reuters.

© REUTERS / Darren Whiteside
Indonesian Investigators Say Terror Attack Unlikely Cause of AirAsia Plane Crash
The cause of the incident remains unknown, and the investigation process is still underway. There are suggestions that the crash might have been caused by poor weather conditions, technical problems or human factor. However, investigators try to be cautious and not to jump to any conclusions until they thoroughly considered all possibilities.

The Malaysian AirAsia plane, travelling from the Indonesian city of Surabaya to Singapore, crashed into the Java Sea on December 28 2014, with 162 people on board. Broad search operations started right after the plane crash but until now only 53 bodies have been recovered.