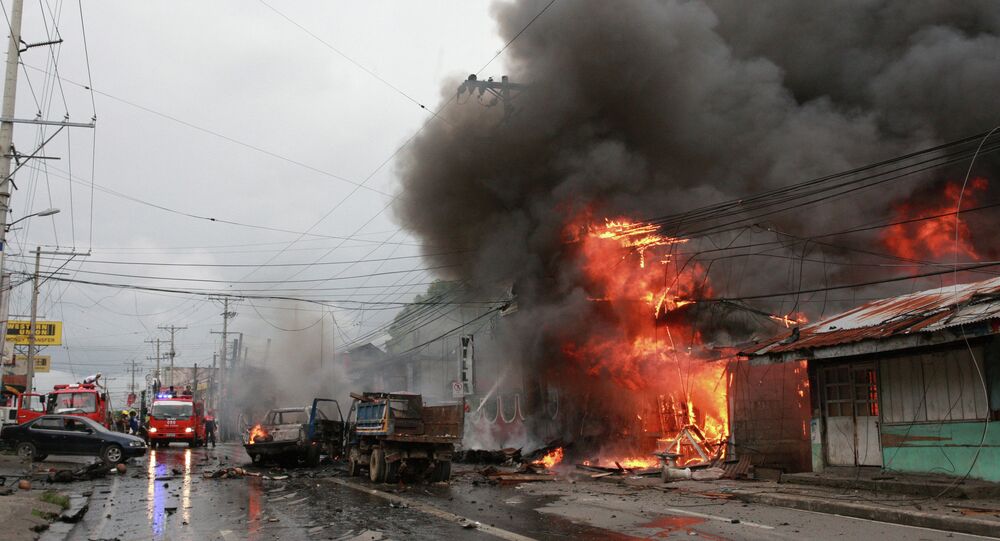 At least 10 people were killed and 34 injured in bomb blast in southern Philippines.

MOSCOW, Dedember 10 (Sputnik) — The death toll from a bomb blast on a bus in southern Philippines has risen to 10, Accosiated Press reports citing local officials.

34 others were injured in the explosion that occurred after the bus, operated by the Rural Transit company, while traveling through the town of Maramag on the island of Mindanao on Tuesday.

The bus was on its way to the major commercial center of Cagayan de Oro City, when the bomb exploded aboard the bus at about 5:45 p.m., Army spokesman Christian Uy said, adding that “we are still investigating this incident.”

17-year-old student Ralph Quilla, who was riding on the bus, was quoted as saying that the explosion took place at the back of the vehicle and wounded him in the arm.

"There was a loud explosion that filled the bus with smoke. I saw bloodied people and jumped out of a window,” she said.

According to police officer Rufina Bayarcal, investigators are now trying to determine the type of the blast and are searching for other possible explosives at the site in Maramag, located about 535 miles southeast of the capital Manila.

Another police officer, who declined to be identified because he was not authorized to speak to the media, claimed that the Bangsamoro Islamic Freedom Fighters (BIFF), a rebel group which had previously split from the Moro Islamic Liberation Front, was responsible for the attack.

“They were extorting money from the bus company. They were trying to send a message because they could not get what they wanted,” the officer said.

Officials have repeatedly blamed Muslim rebels and extortion gangs for the past bombings on buses in the country’s restive southern areas.

The violence shows no sign of abating despite a state of high alert for the military and police forces in the south.

The past few months have seen a spate of sporadic attacks by hardline Muslim rebels, opposed to a new autonomy deal between the government and the Moro Islamic Liberation Front.