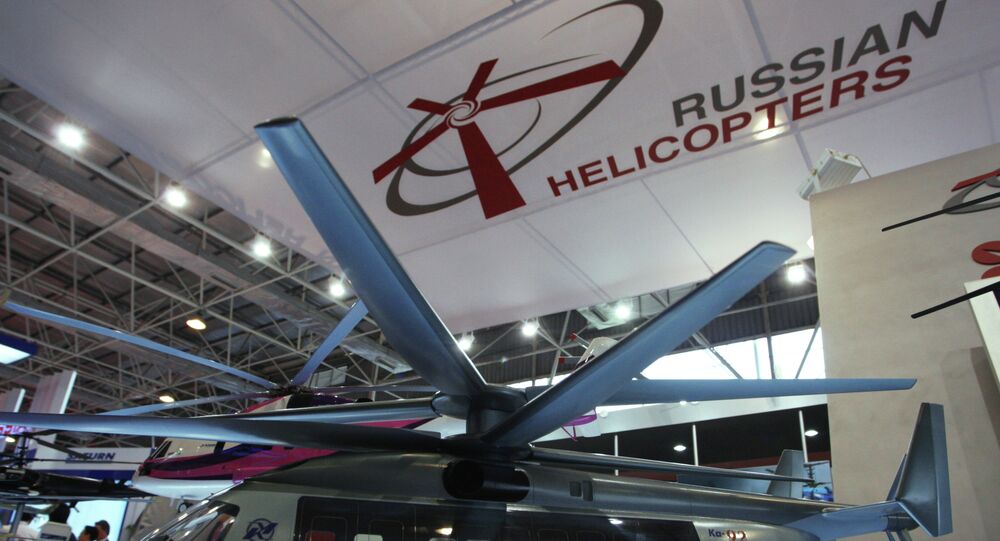 Russian Helicopters, part of state corporation Rostec, is going to expand its cooperation with China on supply of helicopters.

MOSCOW, November 11 (RIA Novosti) — Russian Helicopters, part of state corporation Rostec, is planning to deepen its cooperation with China on the supply of helicopters, the company's press service said in a Tuesday press release.

"China is an important strategic partner of Russia in the supply of aviation machinery. We are planning to expand our cooperation. In October, Moscow signed intergovernmental agreements governing the joint work of Russian and Chinese aviation authorities. Now our cooperation in several key areas will become more efficient, this will also affect exports of new Russian helicopters to the Chinese market," Russian Helicopters head Alexander Mikheev was quoted as saying by the company's press service.

Russian Helicopters is exhibiting its brand-new helicopter models as well as the company's time-proven ones such as the Ka-226T, Mi-171A2, Mi-38 and Ka-32A11BC at the Airshow China 2014 exhibition taking place in Zhuhai.

As for the Ka-32A11BC helicopter, the press release noted that "the fleet of Ka-32A11BC in China is growing dynamically in accordance with the demand increase. In April this year, Ka-32A11BC was delivered to the Ministry of Public Security in Shanghai, in summer two helicopters were supplied to the Sino-Russian Helicopter Technology Company under the 2011 contract for the purchase of 20 such machines."

The most popular Russian Helicopters models in China are the Mi-8/17s, the company said. This year, Russian Helicopters completed the delivery of 52 Mi-171Es to China agreed in contracts signed in 2012 by Russian state arms exporter Rosoboronexport.

The company is also exhibiting a new helicopter in this series — the Mi-171A2, and the new Mi-38 multirole helicopter, saying that it provides "one of the highest levels of comfort and safety of the flight in its class."

In the light helicopter segment, Russian Helicopters presented the new multipurpose Ka-226T, which can be "effectively used in dense urban areas and in the highlands, in different climatic conditions, under sharp temperature drops and the probability of icing."

Together with Rosoboronexport, the company presented the attack helicopter Mi-28NE "Night Hunter" and a new variant of the heavy Mi-26 helicopter, the Mi-26T2, equipped with a modern avionics complex and upgraded engines.

Russian helicopters are well known in China. Its supply of machines to China began with the first production model of the Mi-1, produced in the mid-20th century. Mi-4 helicopters were assembled in China under license under the designation Harbin Z-5 by Harbin Aircraft Manufacturing Corporation, a member of the Chinese aircraft corporation AVIC. In addition to these models, China was using heavy Mi-6s, which came to replace the Mi-26TCs.

China International Aviation and Aerospace Exhibition, also known as Airshow China, is an international aerospace trade show that has been held in Zhuhai every year from 1996. The exhibition showcases life-size products, technological exchange and serves as a platform for trade talks. Russia is represented by 47 companies at the expo is taking place from November 11-16.

OPINION: Replacing Russian Helicopters in Afghanistan Would Cost US