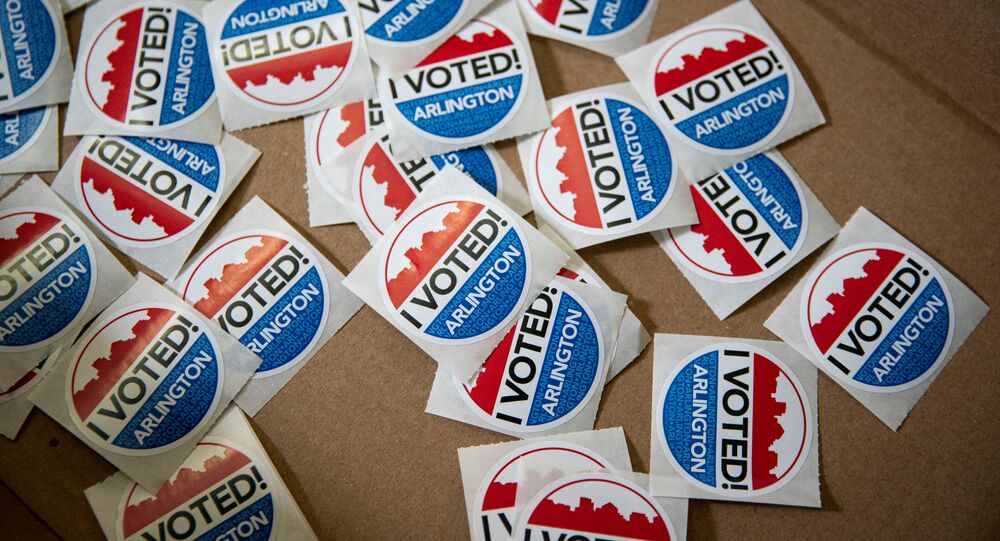 According to Dr Samuel Hoff, George Washington Distinguished Professor Emeritus of History and Political Science, Delaware State University, the US citizens do not want any controversy surrounding the results of the upcoming presidential election.

He believes that the US states need to count the votes swiftly and decide on the winner, so that the country could move on quickly after the election.

Sputnik: Speaking about the turmoil around mail-in ballots, could you please share your assessment of the situation?

Dr Hoff: The pandemic has affected everybody around the globe, and in that sense, it doesn't take time off for elections, national elections like we have now in our quadrennial presidential election. So, earlier this year, four states added to the five that already accept general mail-in ballots, and when I say "general" I mean easier than claiming absentee voter status, just being able to vote by saying I want to vote by mail without any other reason and being able to do it.

Originally, there are five states that allow that now. But four more added to that, to make a total of nine states. You previously have brought up the controversy in Pennsylvania where they apparently misplaced some ballots. In my own state of Delaware, there's been a significant issue as well, and that was a lawsuit against Delaware being one of those nine states that are going to allow mail-in ballots. And it was heard yesterday, and it was decided yesterday by a judge who rejected the challenge, meaning that citizens in the state of Delaware will be able to use mail-in ballots.

In that sense, I want to emphasise that it's not totally unique, but it's certainly a change from what we're used to. We have to understand that in the United States, there are certain rules and procedures that are nationally controlled, like when the election is. But largely, we are looking at fifty different states elections, and in that sense, I know that what your listeners probably want to know is, are all those states set up to be able to take the ballots, count them and have a winner decided in an expeditious fashion. And you know, the truth is we still don't know the answer to that.

Sputnik: Do you think the legitimacy of the upcoming election might already be in doubt?

Dr Hoff: Whenever you have controversy surrounding the results of elections, and usually afterwards, rather than what we've seen particularly with what the President is doing now, President Trump, which is bemoaning the mail-in process and sort of putting a bug in people's ear that there's going to be controversy now, but in the few cases in American history that we had that controversy it's been traumatic.

I don't want to take in too detailed a history lesson but take 1800, when two candidates tied in the electoral college. As a result of that, we had to add a constitutional amendment that separated voting for President from Vice-President. But at the time, even though Thomas Jefferson thought that he was the presidential candidate of his party, his vice-presidential running mate Aaron Burr said well, maybe I would make a good President. So, that wasn't easy to get over that issue. But once we did, we added a constitutional amendment to prevent that screw-up again.

Then there was 1824, where it was the first election in which a candidate got fewer votes than another candidate but won in the electoral college, and we've seen that a couple of times. I still think the most controversial election was in 1876. It was over disputed electoral votes where they ended up creating a 50 percent commission. 8 with Republicans, 7 with Democrats and it doesn't take an expert to figure out who won that election, a Republican won. But in most cases, I think your listeners will remember contemporary events, that means probably either 2000 or the 2016 campaign.

The 2000 [election] is the one that we recall that went for 6 weeks after the election and the Supreme Court had to step in to decide it. I don't think anyone wants to get a repeat of that. Because in my view, it gets to the exact nature of your question. It diminishes the trust the people have in the system and in the electoral system itself. We're not really set up to have a winner decided weeks after the election.

Americans, like everybody, I think, like to see a winner come out of an election so that there is no controversy, so that you can move on, prepare for the inauguration and the transition and the turnover. We don't want this to be stretched for days and weeks afterwards. But as I keep saying, it's 50 states elections. And every state is on the grid now to be able to prepare themselves to 1) get these ballots and 2) have a system whereby they count them expeditiously.

Most of them won't count them officially until after 3 November election. But they've got to come up with a process now, so we don't get into these sorts of controversies. I think the best case scenario would be a landslide for either candidate, so it won't really matter the results of the mail-ins relative to the predicted number that came. It's likely that the election will be closer that what we see now, which is about of 5 to 7 percent advantage to the challenger Joe Biden. I think it will be closer, which actually means we might be looking at days after the election.

Sputnik: How probable it is that a mass lot of ballots will be lost and spoilt because of postal voting?

Dr Hoff: The question of whether they get lost in the mail versus how they are counted by the states. Those are both good questions. But the United States' postal system is pretty good, and you can see even in the pandemic that the postal system [is] just like the old adage that they deliver in the sun and rain and the snow and everything in between, there is more of a worry about the inaccurate or wrong counting once they get to the state.

But there is also a possibility that a few could get lost in the mail, but personally my worry is more about state election commissions once they get those than what happens before that. You also have to remember that if the folks that fill those out make mistakes, they can be rejected and then there has to be a separate group to check that.

I think what happened since the 2000 election is that both sides, Democrats and Republicans, have gotten their lawyers, what we call "lawyering up", in order to prepare for these kinds of scenarios. But they haven't really worried about it since 2000. I think they have to start worrying about it this year.

When we see elections in the US, the electoral college versus the popular election, kind of confuses a lot of folks and of course, we saw that in 2016 with a popular vote winner winning by three million votes and yet losing in the electoral college. Those kinds of issues still come up. But I say once again that either side would be better off by having a decisive result, because we have too many issues like this that really does diminish the nature, the legitimacy of the election itself, and I'm sure the states wouldn't want this to happen, but if you have too many of these fiascos, there'll be more of an effort to have a national counting rather than controlling it in the states.

That's complicated and would cost a lot of time and energy to change. Hopefully, the states' election commissions will have their act together and we will know quickly after the election, if not the same day, who the winner is so that we can move on.