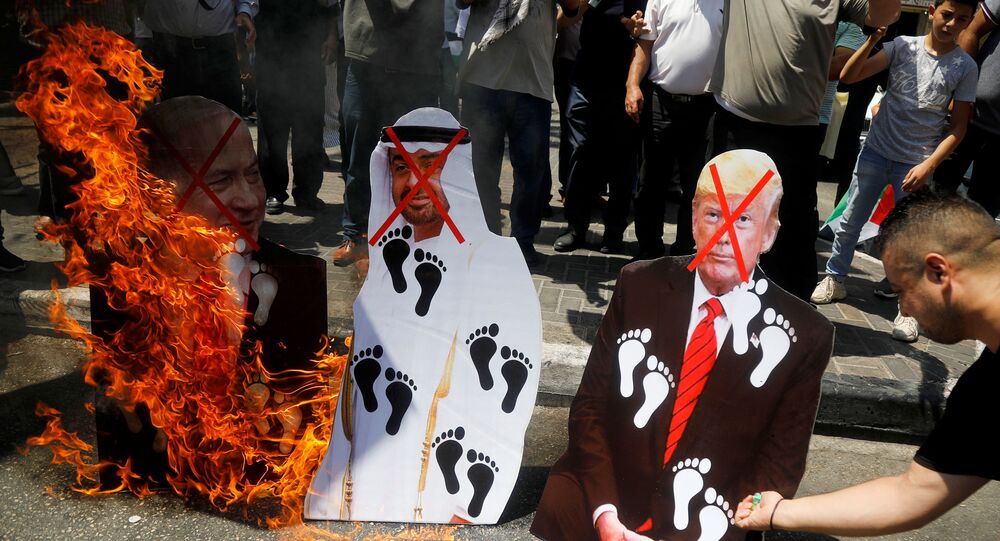 Palestinians are set to gather in Ramallah later today to protest the Israel-UAE peace deal and vent their anger at Tel Aviv's plan to "annex" their land. But a Gaza-based expert says the PA leadership shouldn't stretch the rope too much, especially not at a time when it has been weakened and lost millions of dollars in yearly cash injections.

For many Israelis, Prime Minister Benjamin Netanyahu's announcement that Israel will soon sign a peace agreement with the United Arab Emirates, was a cause for celebration.

Some praised him for becoming the third Israeli PM to conclude a much-needed peace deal with an Arab nation, others emphasised the economic and diplomatic benefits such a pact would entail, and yet there were also those who stressed that the deal would pave the way for a new Middle East, where Israel is accepted and respected.

For Palestinians, however, the general feeling was that of total defeat, mixed with anger and frustration.

Last Thursday, soon after the announcement was made, mobs of Palestinians burnt the UAE flag, mocked the nation's leader Mohammed Bin Zayed, and stepped on his photo, expressing their dismay at the decision to recognize Israel.

The Palestinian leadership, including Hamas and the Islamic Jihad, also joined the chorus of condemnation, rushing to slam the pact and calling it "a stab in the back" to all Palestinians. Saleem Al Ajramy, a Gaza-based political analyst, says the "betrayal" was extremely painful because of its "delicate" timing.

"We were completely shocked by the announcement. It came as we are facing the threat of Israel's annexation [of parts of the West Bank - ed.] which even now hasn't completely been taken off the table".

© REUTERS / RANEEN SAWAFTA
A shoe is placed on a poster depicting Abu Dhabi Crown Prince Mohammed bin Zayed al-Nahyan during a Palestinian protest against the United Arab Emirates' deal with Israel to normalise relations, in Nablus in the Israeli-occupied West Bank August 14, 2020.

Although it was previously reported that the Trump administration, who put forth the plan in the first place, was no longer interested in promoting it, reports have also emerged that the White House is now mulling over an option to set it in stone via a memorandum of understanding, an official document that would force any future US government to commit to the principles pronounced in the MoU.

No Need to Burn Bridges

At the same time, no matter how frustrated Palestinians are, Al Ajramy says the PA leadership will not make any dramatic moves that could destabilise its position even further.

Yet there have also been reports that following the historic announcement, Palestinian President Mahmoud Abbas had decided to recall his ambassador from the Gulf nation, but Al Ajramy believes this was only talk, no action.

"It makes no sense to go ahead with such a move, primarily because the PA's standing on the global arena has recently been weakened", said the expert, referring to the Palestinian Authority's international position which was dealt a severe blow following its rejection of US President Donald Trump's "deal of the century" peace plan and Washington's decision to withdraw its financial assistance to the Palestinians.

"To regain our strength, we will need the support of all Arab nations, and the UAE, with its strong standing in the regional and global arenas, can definitely play a pivotal role in helping the Palestinians to reclaim their status", he continued.

And it can also help them financially. Over the past couple of years, the UAE has injected more than $360 million in cash into the Palestinian economy.

In June, it was reported that Abu Dhabi had sent a second plane packed with medical assistance to the Palestinians, and a month later it was announced that the UAE authorities had pledged some $50 million for Palestinian refugees, contributing to the improvement of their health and education.

It is for these reasons that Al Ajramy believes the Palestinian leadership should not make any hasty and impulsive decisions, taking a more constructive and pragmatic approach to the problem.

According to reports, more Arab and Muslim nations are eyeing to thaw the ice in relations with Israel. Bahrain, Oman, Morocco, and Sudan are allegedly set to follow the UAE, establishing diplomatic ties with the Jewish state in the near future.

And while Al Ajramy doesn't deny that this possibility exists, he does stress that Israel will not be able to bypass the Palestinians in the long run.

"We do see how a new Middle East is now shaping. But it will never reach a fruition without a resolution of the Israeli-Palestinian conflict. The world knows it and so does Israel".