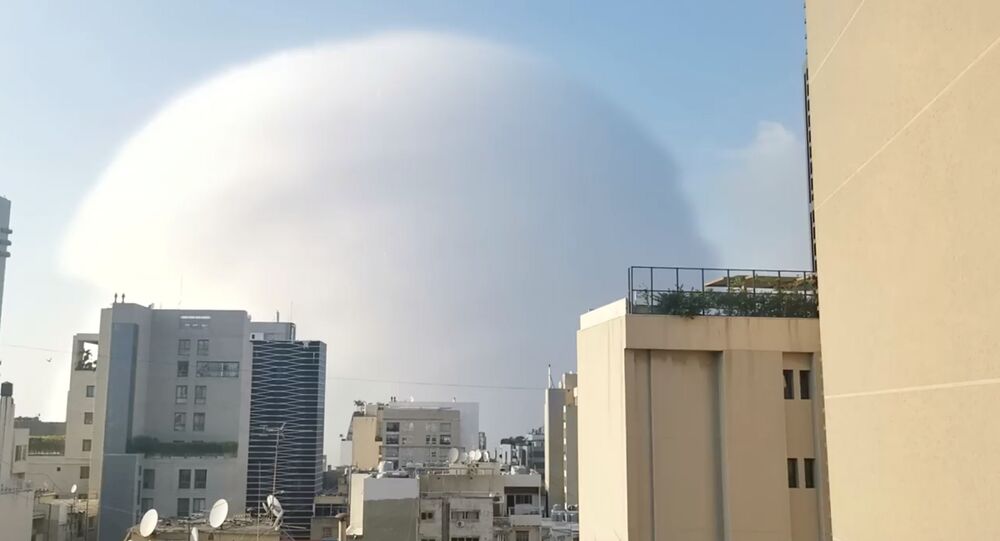 Beirut’s mayor has already likened the tragic incident with the notorious bombing of the Japanese city of Hiroshima, which happened almost exactly 75 years ago.

The harrowing devastation and horrendous "mushroom cloud" that appeared above Beirut's port seconds before the blast wave ripped through the nearby districts could not but spark comparisons with the only two times in history when nuclear weapons were used against cities – Hiroshima and Nagasaki in Japan.

While Lebanese officials' preliminary conclusions point to ammonium nitrate as the likely explosive that detonated on 4 August in the Port of Beirut, the similarity of the historic explosions to the one that happened yesterday can be explained, Christopher Busby, an expert on the health effects of ionising radiation and scientific secretary of the European Committee on Radiation Risk, believes.

© AP Photo / Hussein Malla
In this drone picture, the destroyed silo sits in rubble and debris after an explosion at the seaport of Beirut, Lebanon, Lebanon, Wednesday, Aug. 5, 2020.

Ammonium nitrate, a widely used fertiliser that had been stored in the port for six years, has a chemical reaction energy similar to TNT, meaning that the explosion of 2,700 tonnes of the chemical compound was roughly equal to the power of 2.7 kilotons of TNT, Busby explains. This puts the 4 August blast in Beirut in third place amongst the most powerful explosions that have rocked a city in history, with Hiroshima and Nagasaki coming in first and second place, the expert points out.

"The Hiroshima bomb was estimated at between 10 and 12 kilotons of TNT equivalent. So you can see that this explosion is about 1/4 the size of the Hiroshima bomb. [...] Now [researchers say] that the Japanese a-bombs were 20 kilotons. But that is a revision. Anyway, it still makes Beirut No.3 in explosive size", Busby sums up.

The nuclear expert goes on to explain that the mushroom cloud can also be explained by the fact that the massive shockwave created compression rings in the water vapour just like a powerful nuclear device would if detonated close enough to the coast. Christopher Busby points out that similar ammonium nitrate explosions have taken place in the past, albeit not as powerful as the Beirut one.

"There was one in Texas that destroyed the port and one in Germany in the 1920s at a storage depot. But this one certainly could be the largest after Hiroshima and Nagasaki", Busby says.