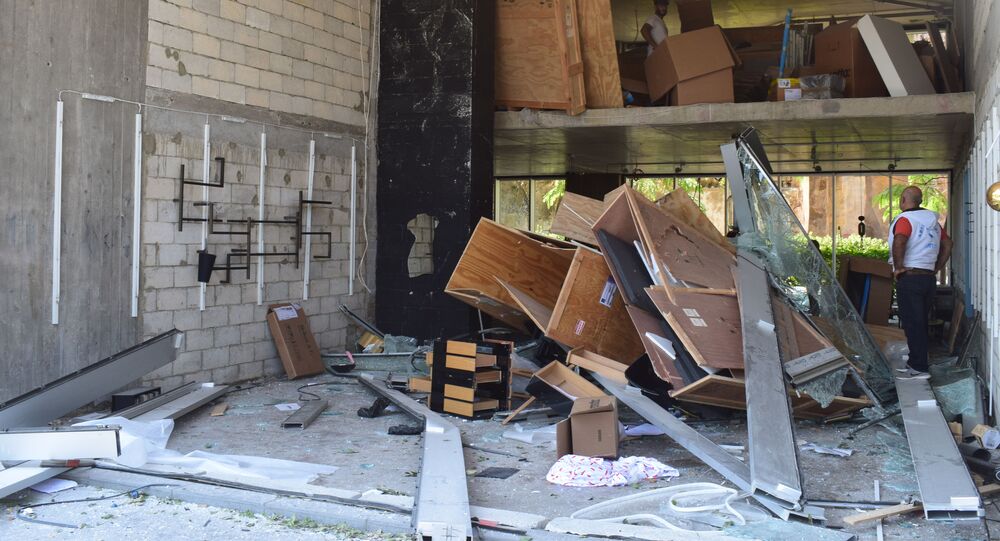 The Lebanese capital woke up to horrid scenes of devastation in the early hours on Wednesday, in the wake of a huge explosion in its seaport that sent a blast wave across the city and beyond, killing at least 100 people, per the Red Cross, and injuring over 4,000.

Beirut’s port and neighbouring districts are in ruins, as the country’s and international services are grappling with the scale of Tuesday's deadly blast, scrambling to find more survivors under the rubble.

Even 4 km from the epicentre - the city’s crucial port - each building lost some, if not all, of their windows.

Long after the explosion, as witnessed from the pictures widely shared on social media, smoke could be seen shrouding the carnage, with huge shards of glass covering roads and cars with smashed windows amid collapsed houses and trees. The mushroom cloud lingered above the port for quite some time before tilting eastwards, witnesses say.

The shockwaves were so strong they reached the neighbouring island of Cyprus, around 240 kilometres (150 miles) away.

"At the time of the explosion the blast wave was felt at least in west, south, and central Cyprus (that I know of)", said Zenonas Tziarras, a researcher at the PRIO Cyprus Centre said

Coastal cities all heard the blast and we felt the shockwave, he added, asserting that many even took it for an earthquake.

"In central Cyprus where I am located (240 km away from Beirut) the doors and windows of the buildings were intensely shaken as if there was a strong earthquake", he recounted.

Dr Kamel Wazne, founder of the Centre of American Strategic Studies in Beirut, in turn, hailed the international community’s readiness to give a helping hand at this hard time:

"The level of devastation, the level of hardship, the number of injured people, and the deaths really require everybody around the globe to come and be helpful to the Lebanese at this time of crisis", Wazne stated emotionally, saying the nation is appreciative of whatever assistance comes from other countries.

He pointed to the far-reaching consequences of the incident which is something "we haven't seen". "It's like somebody's seen a nuclear bomb happen in a few seconds. It's a hurricane just in Lebanon", he depicted the chaos in the city, stressing the need to repair "the extensive damage" brought about by the devastating explosion.

Another witness, Beirut resident Eyad Merei said he was briefly out "to grab something" the moment the blast happened. This is when he distinctly felt a shockwave and a strong blow, which caused him to fall off his motorcycle.

"Glass started coming down, I felt I was in a dream or something. I was completely stunned, there was pressure in my ears and head. Like a dream, like fiction, glass started raining down from buildings and people were running and screaming and [saying] allahu akbar", he vividly recalled.

Adel Mohammad, resident of Beirut, revealed that he was drinking coffee near his store when he felt "an eathquake" and a loud sound just seconds before something hit his head.

The blast took place at 6:07 p.m. local time on Tuesday evening near the port and central district of Beirut, Lebanon's political and economic hub.

Rumours spread as fast as the shockwaves, and by nightfall, Lebanon's security chief, Gen Abbas Ibrahim, had dismissed the initially circulated fireworks theory and blamed the explosion on an industrial accident in a port hangar, which he said had housed a highly volatile substance.

Hours later, Prime Minister Hassan Diab said that about 2,750 metric tonnes of ammonium nitrate, a highly explosive substance used in agricultural fertilisers and bombs, had been stored at a port warehouse for a few years "without preventive measures".

He said an investigation had been launched into the horrific blast, stressing the probe would include "revelations that will be announced about this dangerous warehouse which has been present since 2014". Diab declared a national day of mourning for the victims, and promised full accountability.

According to the latest estimates by the Red Cross, over 100 people died in the blast and in the immediate aftermath, and over 4,000 sustained mild to severe injuries.