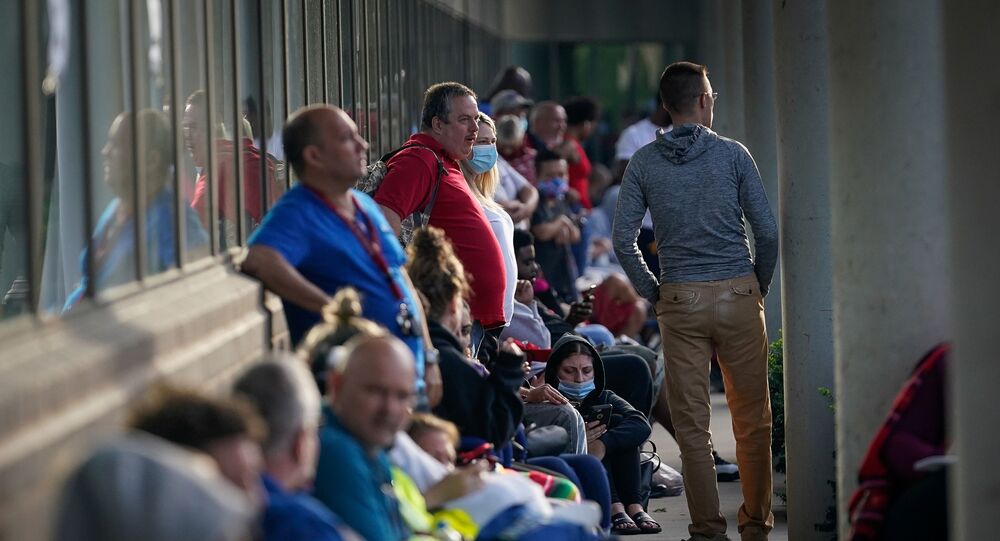 The Trump administration has taken a victory lap after the US Department of Labor released new data this month showing the unemployment rate has fallen to 11.1% in June from 13.3% in May. Pete Dolack, an activist and writer with Trade Justice New York Metro, told Sputnik Thursday that high unemployment numbers will continue for years to come.

“It’s 15 consecutive weeks that more than 1 million people have filed for unemployment in a given week. This has been going on since late March, and the record for all time was less than 700,000. So, think about that, that we’ve beat the old record, 15 consecutive weeks,”  Dolack, author of “It’s Not Over: Learning from the Socialist Experiment,” told Loud & Clear host John Kiriakou.

“What’s scary now is with all the states in the South and the West starting to close up again, I’m really afraid that these unemployment figures are going to start going up,” he noted. “We have a completely incompetent government that doesn’t seem to understand what’s going on, much less have some solutions.”

Tens of millions of Americans are expected to struggle even further after the $600 in weekly federal unemployment benefits expires on July 31.

Dolack said it would be “a period of many years, maybe the better part of the whole decade,” before the US economy returns to normal.

“If you look at the Great Depression, in 1932, things bottomed out at almost 25% unemployment. Did things just bounce back? No, they certainly didn’t. So by the end of the 1930s in 1939, the US unemployment rate was still 17%, seven years later,” he added. “We’re looking at very high unemployment for several years to come … I think there’s just no way around that.”

“We have 25% of the world’s [COVID-19] cases in the US with 4% of the world’s population, and that really sums up just how disastrous the response has been in this country,” Dolack added.

According to a Thursday story in the Wall Street Journal, titled “Companies Raised Record Amounts by Selling Stock During COVID-19 Crisis,” US companies raised almost $190 billion between the end of March and the end of June, a record amount in a single quarter for the US equity-capital markets, due to new-stock issuance and a “resilient IPO [initial public offering] market.”

According to the article, the Federal Reserve “gobbled up” bonds to boost the economy. Publicly traded companies, looking to make money, started selling stocks in response.

“Well, I guess the shorthand explanation [for this phenomenon] would be, capitalism in action,” Dolack explained.

“I think partly this is a fallout from the Trump tax giveaways to corporate America that got put forth for the last couple of years,” he said. “They are awash in money. They have more money than they can possibly invest in anywhere, so what do you do? You put it back in the stock market, you put it in the bond market, you gamble with it. You give stock buybacks, because shareholders [and] Wall Street love share buybacks, because what that means, simply, is that as the company buys shares from willing sellers at a premium to the trading price.”

“Not only is that a nice bonus for the sellers, but for the people who retain their stocks, there’s now less shareholders for the profits to be divided among. So from Wall Street’s perspective, this is great. We all win. Of course when Wall Street wins, working people lose,” Dolack explained.

“This is a direct result of very explicit government policies, both tax giveaways and cutting taxes ever more for corporations and wealthy investors and at the same time, goosing artificially a stock market bubble through this quantitative easing program … I mean, we’re talking literally trillions of dollars are committed by the Federal Reserve in these bond buybacks, and I also think they are also buying up mortgages as well. And again who pays for this? It’s working people who lose their jobs,” Dolack added.