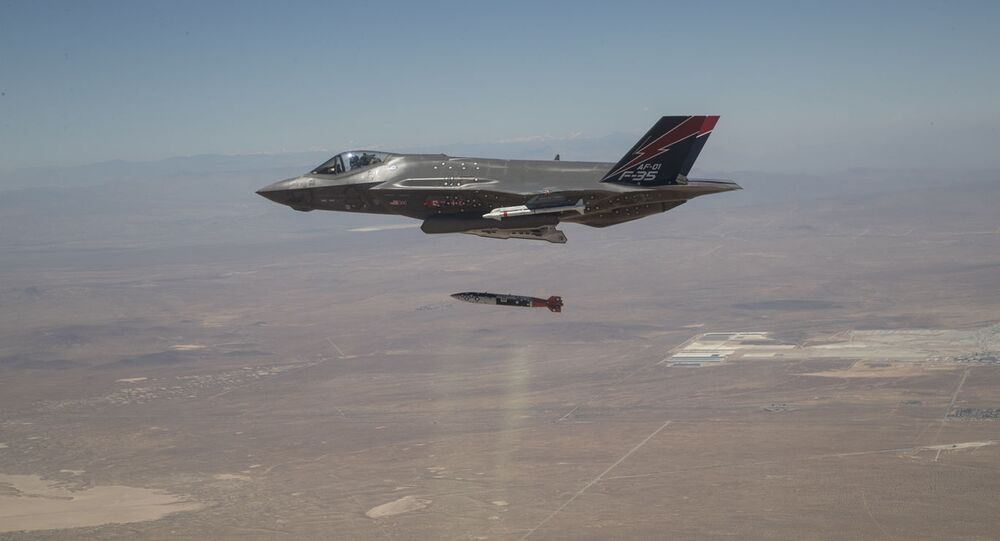 Turkey continues to participate in the US F-35 fighter programme, despite the US decision to exclude Ankara for purchasing Russian S-400 anti-aircraft missile systems, said Republican Senators James Lankford and Thom Tillis, along with Democrat colleagues Jeanne Shaheen and Chris Van Hollen, in a letter to Pentagon Chief Mark Esper.

“The law adopted by Congress and signed by President Trump sent a clear diplomatic signal to Turkey on the consequences of pushing forward Russian defence systems and technologies. Unfortunately, this strong signal is undermined by repeated delays in Turkey's removal from the supply chain”, the message said.

Turkish companies still produce and supply key elements of the jet fighter, said the senators, although their participation in the programme was due to expire in 2020. “Congress has always understood that exclusion of Turkey from the supply chain will create additional expenses for the Department of Defence and taxpayers. However, this financial violation is necessary to preserve the integrity of the programme and reaffirm our country's diplomatic obligations to NATO”, the senators point out.

Retired Brigadier General of the Turkish Armed Forces Naim Baburoglu, a specialist in military strategy, commented on the situation around Turkey's participation in the F-35 project, stressing that Turkey currently produces 139 parts for this aircraft. However, by the end of this year the US will deprive Turkish companies of this opportunity, he said.

"As you know, Turkey could not receive F-35 aircraft, for which it had already paid earlier. These fighters were adopted by the US Air Force. This was a kind of confirmation that these fighters will not be handed over to Turkey", the military strategist said.

According to Baburoglu, Turkey acted as a country-manufacturer under the F-35 programme, and before Ankara purchased the S-400 air defence system, Turkish companies produced 1,005 parts for these aircraft. But the US, in response to Turkey's purchase of the S-400, reduced the number of parts produced to 139, thus depriving Turkey of the opportunity to produce 866 parts.

The reason that Turkey in principle was allowed to produce components for fighter jets is that the US has not yet found companies that could replace Turkish manufacturers. However, this production will also be taken away from Turkey by the end of 2020. In other words, Turkey will not be able to get these aircraft from the US, and it has no place as a manufacturer in this programme, the expert noted.

"How should we interpret the position of the American senators? The United States and NATO could not accept Ankara's purchase of strategic weapons from Russia, which they regard as an “enemy” and a “threat”. The reason for such a harsh reaction was that the S-400 is not a tactical or medium-range weapon, but a strategic weapon", Baburoglu said.

The expert believes that the steps taken by Washington prove the fact that the US and Turkey, not only today but in the past as well, have never been strategic allies.

“The United States has never been either a strategic partner or a strategic ally of Turkey. Both countries are only NATO members. The US support in the Eastern Mediterranean of Greece and the Greek Cypriot Administration, their policies that threaten Turkey's interests in Syria, the support of the Democratic Union Party/Kurdish Self-Defence Forces, the ongoing discussion of anti-Turkish economic sanctions and the exclusion of Turkey from the F-35 program indicate that the US has never been a friend or ally for Turkey”, Baburoglu explained.

The retired general further expressed his disagreement with the widespread thesis in Turkish media that “tense relations between Ankara and Washington are connected with the US presidential elections”.

Baburoglu personally does not share this approach, as there are no signs that after the upcoming US presidential elections the attitude towards Ankara will change for the better. He believes that no matter who takes the presidential office in Washington, whether it is Donald Trump, or Joe Biden or somebody else, the US position towards Turkey will not change.

“Those who believe in positive developments after the elections should answer a few questions. Will the new president end cooperation with the Kurdistan Workers' Party/Democratic Union Party? Will sanctions against Turkey be lifted? Will he decide to sell the F-35 to Turkey? Will the support of Greece and the Greek Cypriot Administration in their anti-Turkish approach stop? The answer is “no”. And for this reason, Turkish policy will not change after the elections”, he stressed.

In conclusion, Baburoglu added that the US stance towards Turkey in all areas mentioned above, mainly the situation in Syria, indicates that it is impossible to build long-term cooperation between Turkey and the US in Libya.