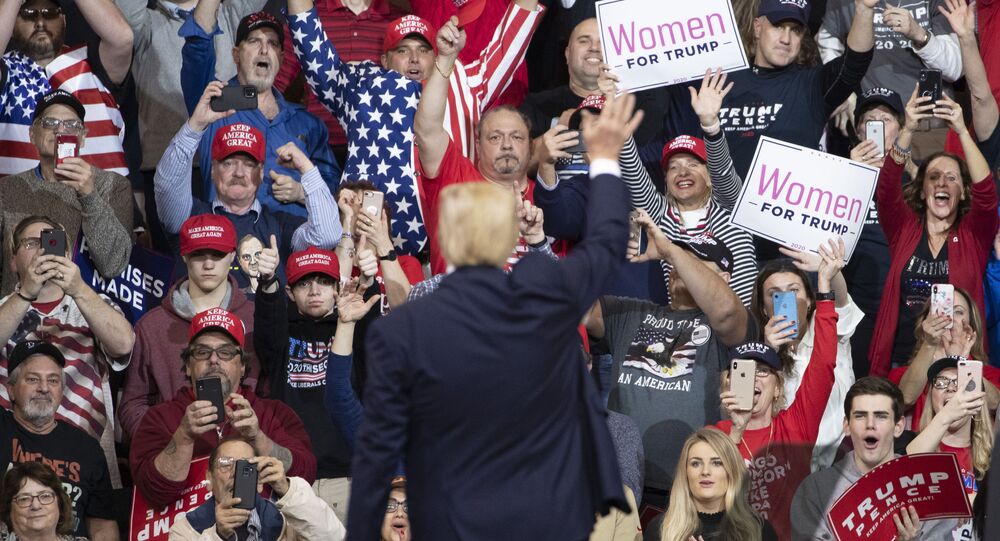 President Donald Trump’s Tulsa rally will give him an important opportunity to cut through the media’s filter of negativity and deliver his reelection campaign message to thousands of Oklahomans and millions of Americans, political observers speaking to Sputnik suggest.

President Trump is heading to Tulsa, Oklahoma Saturday to hold his first mass rally since the start of the coronavirus pandemic. Health officials have claimed the event may cause a surge of COVID-19 cases, while liberal leaders have pointed to the city’s record of white on black violence, and accused Trump of “insensitivity” in his choice of venue.

The rally, set to start at 7 pm CT (8 pm EST), has received plenty of coverage, both good and bad, in the past week or so. Hillary Clinton has blasted the event over the liability waiver participants will be made to signs to assume any risk associated with coronavirus. Other critics attacked his choice of Tulsa amid the racially charged atmosphere in America, pointing to the 1921 massacre in the city, which saw mobs of angry white residents attacking black residents and businesses, with the violence leading to the deaths of up to 200 African Americans and 50 white Americans.

Trump’s supporters and the president himself, meanwhile, have pressed forward with the event, insisting all necessary anti-coronavirus precautions will be taken, while warning violent protesters to stay away. Altogether, as many as 100,000 people are expected to descend on the city, either for the rally or protests.

“The rally is extremely significant because the president has not really had a chance to express his position on the [Black Lives Matter] rallies without the filter of the media,” says Carmine Sabia, self-described ‘Christian conservative, NRA member and Israel supporter’, writer and editor at large for SabiaReport.com.

“There are legitimate concerns from many of the protesters that have to be addressed but the facts and statistics show that the systemic racism in policing that they believe exists does not,” Sabia suggests. “The leftist media has had a field day promoting the idea of racist police in an effort to attack the president in an election year. History shows they have done the same in the previous two elections.”

“President Trump going ahead with the Tulsa rally is a rousing rebuke to the haters and destroyers who are trying to sow chaos in the US today. Leftist and establishment Right politicians are cowering in fear, but Trump is magnificently unbowed,” Geller says.

“His rally sends several important messages. One is that he is not going to allow himself to be cowed by the ongoing COVID-19 hysteria. The virus is not as devastating or deadly as was predicted, and free people must reject the ongoing attempts by Democrat mayors and governors to prolong lockdowns endlessly for partisan reasons, to slow the resurgence of the economy and hurt Trump's reelection chances,” Geller suggests.

Attorney and political commentator David E. Kenney recalls the violent racial clashes that swept across Tulsa back in 1921, when mobs of white residents attacked black people and their businesses in the city’s Greenwood District. The massacre erupted after young black man, Dick Rowland, was accused of assaulting a 17-year-old white girl, Sarah Page, and taken into custody.

"Today, while protestors on the Streets of San Francisco are transforming into rioters and dismantling statutes of Junipero Serra, Francis Scott Key, and General and President Ulysses S. Grant, attacking the history of the Catholic church and the nation, President Donald J. Trump intends to hold a political rally in Tulsa, Oklahoma near the Greenwood District. The great promises of America include diversity but even more so equality. Following in the footsteps of the great orator Dr. Martin Luther King, President Trump may well etch himself into the heart of every American or risk his statue, if any ever, being defaced along with Winston Churchill's in Parliament Square or vandalized like Mahatma Gandhi's in Amsterdam, Leicester, and Washington, DC", Kenney says.

He adds: "It's a tough crowd out there nowadays. Perhaps a few rioters have transformed into protestors. Maybe a few are already fashioning statues for Joe and Hunter Biden in Chinese. Even though he was born in New York, President Trump has the right to speak in America".

According to Geller, the media’s criticism of the Tulsa rally demonstrates its “hypocrisy,” owing to its celebration of BLM protests “while suddenly stoking up Covid hysteria again regarding Trump's rally.”

Sabia agrees, suggesting that the media has proven itself “laughably biased” when it comes to the Tulsa event. “The same media that championed and promoted the Black Lives Matter rallies, where social distancing was virtually nonexistent, are now concerned about one rally…The fact is they do not want President Trump to hold rallies because they fear that former Vice President Joe Biden will have to respond by holding his own rallies in front of near empty arenas.”

Sabia suggests that if Biden responds, it may end up being the ruin of his campaign, because his apparent old-age dementia will be exposed for all to see.

Geller believes that rally will see Trump reiterating his ‘America First’ election campaign message, “which is all the more important in light of the ongoing anti-American riots, destruction, and tearing down of statues of founding American figures such as Thomas Jefferson.”

Sabia, meanwhile, expects Trump “to be his usual, energetic self” and to “state the facts, as he always does,” and that the rally will lead to a bump in his poll numbers. It’s possible, he says, that Biden will be forced “out of his basement and onto the campaign trail, where he does not want to be.”