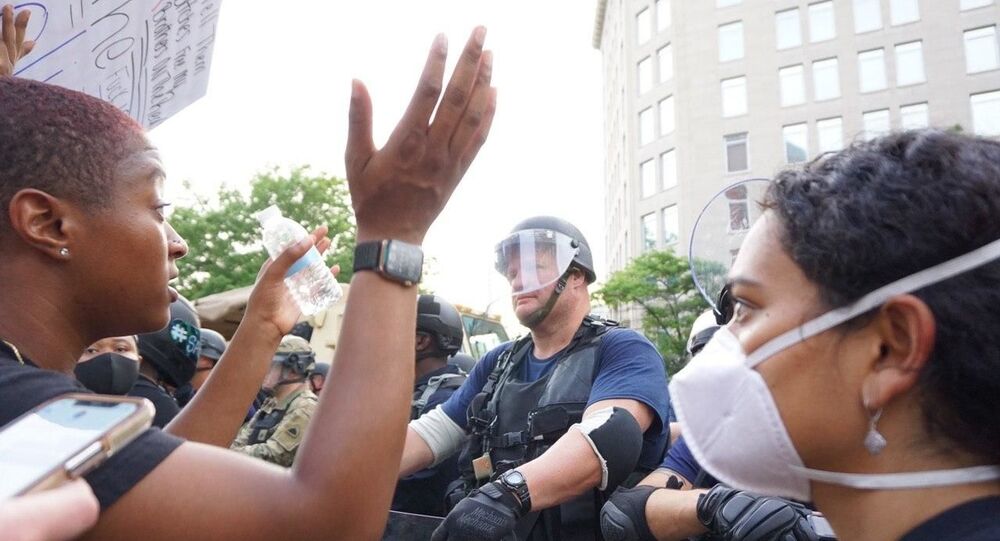 A lawyer acting on behalf of George Floyd and his family has stated that a pandemic of racism led to his death at the hands of the Minneapolis police last week.

James Dalton, Party Secretary of the 5 Star Direct Democracy Party, reflects on the nationwide protests in the US sparked by the murder of George Floyd in police custody.

Sputnik: How will the death of George Floyd impact the upcoming US presidential election?

James Dalton: I think that this is completely politically motivated through the press. What we have seen in the last week is a pre-determined propaganda exercise, as we see in all election cycles, and they have hooked it around this particularly terrible incident in Minneapolis when the chap appears to be have been treated particularly awfully by the police when he’s been arrested.

That’s a crime in the United States of America, and there are obviously around 50 to 52 homicides every day in the US, so what we are seeing is purely political hackery, and it all has to do with destabilising the political situation in the run-up to this years’ presidential election.

It’s obviously a very powerful fraud that is being played on the unsuspecting peoples throughout the world, and political actors are trying to pit people against each other based on, in this instance, the colour of people’s skins.

Sputnik: Is it fair to call the Minneapolis police force institutionally racist?

James Dalton: It’s rather sad, because when you take this incident in Minneapolis, the death of George Floyd, and when you look at what has happened; there has been an incident, a crime, and it has been recorded on video footage, and some seven days ago an individual was charged with third-degree homicide, so due process of the law is underway.

They can go and look at for instance at Chief Medaria Arradondo, who is the Chief of Police in Minnesota, who is a black gentleman. He joined the force in the early 1980s, and he has managed to get promoted through the ranks to become chief of police.

If the police force in Minneapolis is structurally racist; then maybe we could have a word with this silent person as to why that might be?

Sputnik: Should Black Lives matter protesters be venting their anger at the Democrats as opposed to President Trump?

James Dalton: Maybe we could talk to the Democrat Mayor of Minneapolis Jacob Frey, who obviously has responsibility for law and order in the city of Minneapolis, or maybe we can go back all the way to 1979 because that is how long Minneapolis has had a Democratic Mayor making decisions on behalf of the people of Minneapolis.

You could look at the Senators; you’ve got Amy Klobuchar, who when she was in the Attorney General’s office in Minneapolis; failed to sack this particular police officer, who is obviously in the spotlight now when there was an incident where three people died in a police chase that he was involved in before.

Amy Klobuchar; who is obviously a Democratic Senator, wanted to be President of the United States, and was on the ticket in an attempt to become the Democratic nominee, she is the Senator of Minnesota, and who is talking to her about law and order there?

Is there an institutional racism problem within the Minnesota police department? Well if there is; it is clear who is running it for the last forty years, and I just find it bizarre that somebody would make that suggestion when you look at the Chief of Police, and he is a black gentleman, it just doesn’t make any sense.