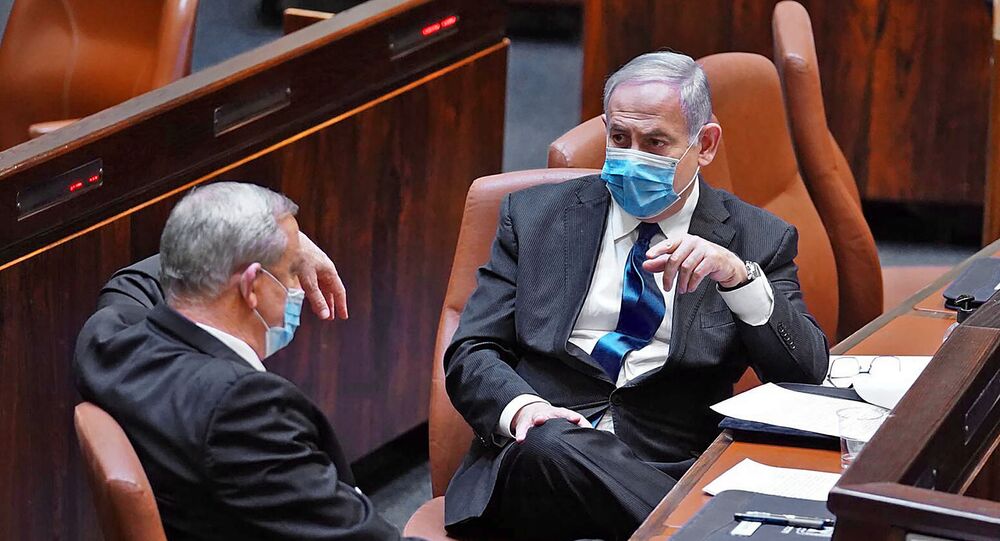 MOSCOW (Sputnik), After months of political turmoil, three neck-to-neck votes and an infight that delayed the ceremony initially slated for Thursday, Israel's new unity government has finally been sworn in, but its survivability and the country's political future will solely depend on the ability of its co-leaders to reach a consensus.

The government sworn-in on Sunday will comprise 36 ministers, making it the biggest cabinet in the nation's 72-year history. Under the power-sharing agreement, Gantz will serve as the defence minister and Netanyahu's alternate prime minister before succeeding him in 18 months. Some of their ministers will rotate as well.

Gabi Ashkenazi, a member of Gantz's centrist Blue and White party, will initially serve as the nation's foreign minister and then take over as the defence minister 18 months later. Blue and White has also secured justice, tourism, immigrant absorption, culture and sports, agriculture and other portfolios. Netanyahu's Likud will have finance, public security, health, transportation and education ministries.

In theory, ministerial portfolios have been distributed in such a way that gives Netanyahu and Gantz an equal footing in the new cabinet, but Israel's longest-serving prime minister may still take the reigns, according to Professor Eyal Zisser, the vice rector of the Tel Aviv University.

"Netanyahu is more experienced, so I guess he can manipulate the others. So, formally there is a balance but, actually, Netanyahu will have the upper hand as always, but maybe not in all things", Zisser said.

Gideon Rahat, a senior fellow at the Israel Democracy Institute and a professor in the Department of Political Science at the Hebrew University of Jerusalem, similarly noted that there might be factors, not outlined in the coalition government agreement, which give one side more power than the other.

"But, basically, it is all about building a government with two heads that is based on consensus and mutual veto", Rahat believes.

© AP Photo / Oded Balilty
Preparing for the Day After: COVID-19 Poses Threats but Israel is Ready to Seize Opportunities
Both Netanyahu and Gantz promised that their emergency government would focus on handling the coronavirus crisis and associated economic upheaval, which has already seen Israel's unemployment soar up to 25 percent.

With the acute need for political stability, it is hardly unlikely that Netanyahu, often referred by media as "magician" for his political survivability, would try to sideline Gantz right away, but he may still try some tricks in the run-up to the rotation in order to stay in power, according to Zisser.

"So for the time being the government will survive, maybe until it's time for Netanyahu to change places with Gantz and then he will start playing games that can lead to the fall of the government", the expert believes.

The survivability of the much-awaited government now solely relies on the ability of Netanyahu and Gantz — two rather different politicians and fierce rivals — to find common ground and reach a consensus without vetoing each other's every move.

© AP Photo / Oded Balilty
Tweeps Praise Israeli High Court's Decision to Greenlight Netanyahu-Gantz Pact
Despite the Israeli government now comprising both right-wing and centrist politicians, one should not anticipate significant changes to the existing policies of Israel, yet the new government could be more "active" given its wider legitimacy, according to the expert.

"If they decide that they want to take an initiative either in foreign affairs or in security, they can have it because they have a lot of legitimacy as they represent both center and right ... But first they have to agree", Rahat says.

Apart from the coronavirus crisis, the new government will also have to eventually address "the deal of the century", a controversial peace plan proposed by US President Donald Trump and welcomed by both Netanyahu and Gantz. The plan envisions Israel annexing its settlements in the West Bank and keeping Jerusalem as its undivided capital, which has caused an uproar from Palestinians and the Arab world as a whole.

© AP Photo / Ariel Schalit
Israeli Extension of Sovereignty Over W Bank Areas May Prompt 'Massive Conflict', Jordan's King Says
Earlier this week, King Abdullah II of Jordan has warned of "a serious conflict" should Israel go through with the plan's implementation and attempt to extend sovereignty over the Jordan Valley.

In the 2 March election, both Netanyahu's right-wing bloc and Gantz's centrist camp fell several seats short of the parliamentary majority needed to form a government. In mid-March, the Blue and White leader won a mandate to form a government and entered into talks on a national unity government with Netanyahu at the latter's invitation in order to jointly address the national crisis prompted by the spread of the COVID-19.

The parties failed to reach a unity government deal before the deadline, and Israeli President Reuven Rivlin sent the mandate to the Knesset, tasking lawmakers with forming a government within 21 days. However, the two sides have ultimately managed to strike a deal before the three-week deadline expired, ending the stalemate that could have led to the fourth election.