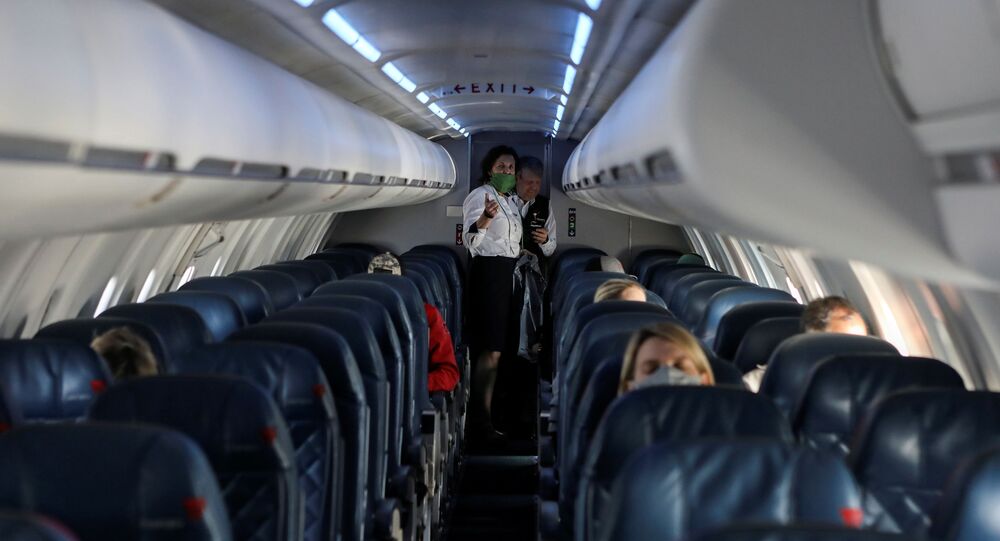 The aviation industry was among the first that the pandemic struck and is projected to be one of the last to recover once it's over. But will it return to its previous state, or will it be changed forever, as was the case after a past major event that shocked the industry – the 9/11 attacks?

Despite borders being closed and flights being restricted to only essential travel around the world, airline companies continue to operate after massively slashing their flight schedules and sending most of their jets back to their hangars in anticipation of better times.

The amount of flights, however, is not the only thing that has changed, as many companies have taken a number of safety precautions to protect the few customers that they have left. Namely, American Airlines has intensified and expanded its cleaning procedures, focusing on high-touch areas. The company has also instructed its employees to keep a recommended distance from other people and has allowed them to wear gloves and masks, promising to provide these to staff once the items, currently in short supply, become available more abundantly.

"[We] are working to provide masks to all front-line employees as quickly as we can obtain supplies without taking any actions that would deprive such necessary supplies from first responders and health care providers", the airline told Sputnik.

While the company doesn't provide masks to its passengers and doesn't require them to wear them, the airline still seats travellers on board in a way that they have space for proper social distancing. However, not all airlines consider this measure to be effective. Ryanair indicates that the suggested practice of keeping the middle seat in a row vacant is "wholly ineffective" and fails to comply with the two-metre requirement of social distancing rules.

"We need effective health measures that work, such as wearing face masks and/or monitoring body temperature, which will help to meet health guidelines while allowing airline passengers to travel by coach and train to airports, to pass through crowded airports, and board/disembark aircraft without spreading Covid-19", the airline suggested.

What the Future Holds for the Aviation Industry

However, more changes could be in store for the industry even after the pandemic is over. The outbreak has severely slashed the income of airlines, Lufthansa stated, while reporting one million euros in losses per hour in liquidity. According to the airline, it has retained only around 1% of its normal amount of clients.

Lufthansa does not expect a quick recovery of the industry even after all the lockdowns have been lifted. The company projects a return of the necessary demand to restore the industry to pre-crisis levels only by 2023. This will lead to a number of consequences for the industry, aviation experts predict.

One of the consequences is that while some airlines will go bankrupt, the survivors will consolidate over the course of the three years after the crisis ends, Nigel Frith, a senior market analyst at the Ask Traders investment website, believes. He also predicts mass cuts in jobs far more severe than the recently reported planned 12,000 reduction in the number of British Airways personnel.

"We have entered a very dark decade for the airline sector", the analyst concludes.

Another consequence of the pandemic will be changes to pricing by airlines in the future. The first wave of travellers after the lockdowns are lifted will likely be greeted with cheap tickets as companies will be luring out cautious fliers, aviation consultant Robert W. Mann Jr suggested in an interview with Forbes. But in the long term, the prices will go higher than during the pre-crisis times, with package options becoming a new trend, captain Desmond Ross, an experienced aviation industry specialist, adds in his comment for Sputnik.

"Number of flights [will probably be] less than 50% of previous - flight costs will be much higher as a result - creating a much more expensive situation - less passengers.  Number of carriers [will probably be] only 30% of [pre-crisis levels]. Reduced competition.  Package holidays - Flight, Hotel and Travel insurance bundled will become the only option or leisure travellers", Desmond Ross suggests.

At the same time, Ross expresses concerns that many airline won't be able to restructure quickly enough to avoid bankruptcy and will be unable to resume operations when the time comes.

"Financial pressures they are currently facing almost inevitably lead to safety issues as well. Can they pay the costs needed for proper maintenance or for proper training of staff? I would expect to see the failure of many Low Cost Carriers which do not have good reserves of funds. Only the larger legacy carriers will survive and be able to pick up again when travel returns. The individual staff members are going to suffer significantly and many will not return to aviation jobs. Unfortunately there was probably not much that could have been done in this situation. It all happened very quickly and unexpectedly", Ross adds.

Some of the safety precautions could be preserved, too. Budget carrier EasyJet Plc intends to keep the middle seats empty at least for some time after the pandemic is over. Chinese airlines have been ordered by the government in a new set of regulations to clean the interiors of planes more often, even during flights, and to limit food services.

Korean Air Lines has started providing its crew members with a full set of protective gear designed to protect them from infection, although it's unclear whether the measure will be retained post-pandemic. In addition to measures on board, the consulting firm BCG suggests that pre-flight health checks at airports for passengers might also become a new reality after the crisis is over.