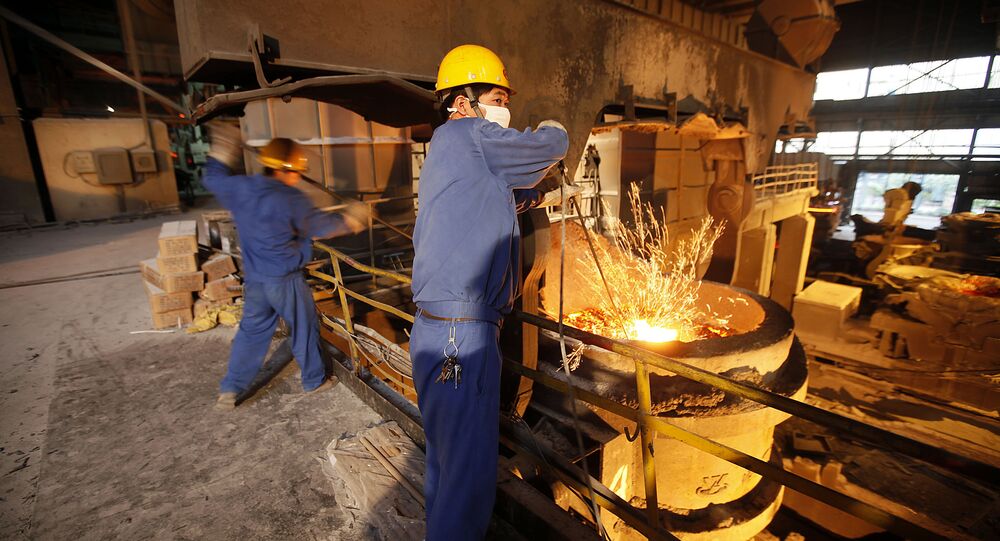 According to Mei Xinyu from the Centre for International Economic Cooperation at China’s Ministry of Commerce, China remains a reliable supplier of valuable raw materials, regardless of the economic troubles caused by the epidemic.

Rare earth metals are an essential element for the global production of high-tech electronics as well as other products. On the one hand, the share of this raw material in the production of a single product is rather small. However, it’s widely used in the production of smartphone screens, motherboards and other complex electronics. Even the military-industrial complex depends on the supply of these metals: for example, combat aircraft fuselages are made from alloys with rare earth additives.

Until the early 1990s, most rare earth metals were mined at the Mountain Pass mine in the United States. But later it became clear that the world’s largest deposits of this rare resource are in China. As a result, the country has become the world’s main producer and supplier of rare earth metals; China now accounts for 95% of all global supplies.

For a long time, China used quotas to limit the export of rare earth metals. First, as a global factory, China was not only a manufacturer but also a major consumer of these products. Second, rare earth metals mining causes some damage to the environment, so it’s strictly regulated in accordance with the projected demand for raw materials. In 2015, China abolished export quotas but maintained its general production quotas.

In the first quarter of 2020, rare earth metals mining in China suffered due to the coronavirus epidemic. As the Global Times reported in February, rare earths production is only operating at 20% capacity. At the same time, the authorities have set a 66 thousand tonnes quota for extracting this raw material in the first half of the year, which is 6 thousand tonnes more than in the same period of the previous year. The current rare earth metals export statistics show that there will be no interruptions in the global supply of this raw material. Although China has been affected by the epidemic, production is resuming rapidly, Mei Xinyu from the Centre for International Trade and Economic Cooperation at the Chinese Ministry of Commerce, said.

“We see that in the first quarter, rare earth metals exports declined slightly. This was facilitated, firstly, by the rapid restoration of production in China itself. From the first half of February, China has already started promoting gradual production restoration, based on scientific data. Secondly, in the first quarter it’s still difficult to assess the epidemic’s impact on the global electronics industry. Together, these factors have resulted in China showing a very slight decline in exports in the first quarter. However, I believe that in the future there will be no problems on the part of China as a supplier of this raw material. In any case, China remains a reliable manufacturing base, perhaps even the most reliable manufacturing centre.”

Since the coronavirus epidemic started spreading worldwide later than in China, its effect on other countries’ production activity can be assessed only in the second quarter. If earlier the world was worried about the stability of rare earth metals supply on the market, since, as mentioned above, China occupies an almost monopoly position as the main supplier; today, according to the expert, there may be a lack of demand for these products due to interruptions in global supply chains. We face a paradoxical situation when, for example, magnets manufacturers are provided with rare-earth metals, but they are not supplied with elementary boxes to put these magnets in. Such a situation could further change the balance of power in the global rare earth metals market, May Xinyu believes.

“Today, in terms of supply, China remains a stable supplier. However, in terms of global demand for rare earth metals, it will be possible to assess the epidemic’s impact only by the second quarter results. If the decline in global demand is significant, China alone won’t be able to make up for the falling demand. And this, of course, will greatly affect the industry. Suppliers not from China, but from other countries, will especially suffer. I personally believe that in the second quarter there may be a significant reduction in demand. In that context, smaller suppliers from other countries can further reduce their market presence, or even completely stop working. But China’s share in the global rare-earth metals market may even increase.”

China is unlikely to have any problems with rare earth metals supply. The country is trying to maintain and strengthen its status as a global producer of this valuable raw material. Quotas for rare earth metals production are expected to expand in the second half of the year. Rare earth metals reserves are not limited to China. However, their extraction and subsequent processing is a complex technological process, which is hard to establish quickly. China, in turn, seeks to close the full cycle of the rare earth industry. Already today, from 3 to 4 thousand tonnes of rare earth metals concentrates mined in California are sent to China for further processing every month.