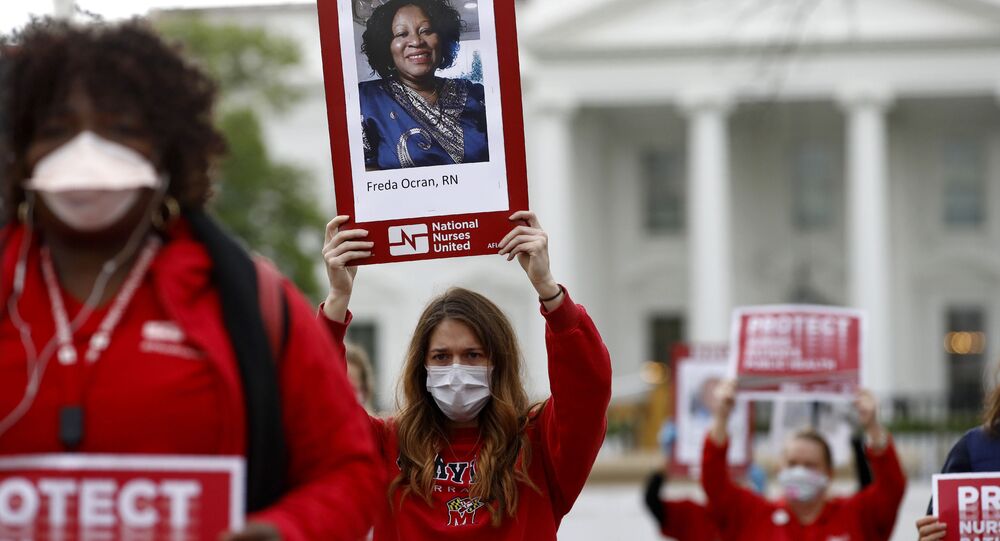 A physician on the frontlines of the COVID-19 outbreak in Washington, DC, joined Radio Sputnik’s Political Misfits Tuesday to speak anonymously about conditions in the capital’s hospitals. There is still not enough personal protective equipment (PPE) for healthcare workers and conditions are so dire, nurses have taken their rage into the streets.

On Tuesday, National Nurses United (NNU) held a protest in front of the White House to speak publicly about the lack of PPE during the pandemic.

“I think we’re getting to the root of the matter. And I can tell you that, even at the place that I work at - United Medical Center - I had a phone call yesterday with a member [at] SEIU [Service Employees International Union] who basically said that their workers … everyone that’s providing care are not getting PPE; they are reusing PPE. And in fact, it was a DC mutual aid group which has been making face shields and has been providing it to them, and they’re now at a point where I can tell you, at least a few hospitals, they’ll say they have enough PPE, but the reality is that it’s not happening. It hasn’t been for a while,” the doctor told hosts Bob Schlehuber and Jamarl Thomas.

​United Medical Center is the only remaining hospital east of the Anacostia River, where the poorest and most predominantly Black neighborhoods in the city are located. The facility is due to be closed in 2023 amid city budget cuts.

“We’ve had people, nurses, reach out to these volunteer groups for PPE. But I think the biggest point right now regarding PPE, there’s a national protest by nurses today and in fact a lot of local DC nurses protested in front of the White House. I’m sure you all might be aware of that. Imagine being in the middle of a pandemic, scared, anxious, frustrated, overworked - Lord knows how much toll this is taking on their bodies and their minds. And the nurses are out there in front of the White House risking themselves and protesting, because we’re seeing downgrading requirements for PPE,” the doctor added.

“It’s a lot of anxiety, it’s a lot of stress, and it’s just so harmful, this collective trauma that we’re all under right now,” they continued.

Last week, US President Donald Trump unveiled his "Guidelines for Opening Up America Again," a three-phased approach to restart American state economies despite the fact that the number of coronavirus cases in the US continues to increase. Hospitals in the US, just like businesses, are looking to make money, the doctor pointed out.

“At the end of the day, it’s a money-making business … I can tell you that the city, including the hospitals, are handling this with their eyes closed. We are documenting this. We’re okay with having thousands of people die … we can almost even get back to our lives by simply doing massive testing and contact tracing … but there really isn’t a plan here,” they added.

However, according to the doctor, the trauma caused by the coronavirus outbreak is simply the product of a health care system designed to generate profit. They also noted that the protesting nurses understand that they are advocating for fair labor practices and health care services to protect all people.

“One thing which one of the nurses in the city actually asked me to specifically advocate and actually talk about was that we have this labor revolt happening right now in our city,” the physician said. “Nurses are out there, and then there are fights that most nurses, most other direct care providers in the city are Black, brown, immigrants and mostly women. Most people fighting out in the streets right now providing food to people are Black, women, brown people, immigrants. We’ve had this dichotomy, but we really need to come together now.”

“These disparities exist not just in the community that is being supposedly cared for by these health systems but also within people in the hospital. People working for the system - they are right now being asked to take forced PTOs [paid time off]. I know for a fact that [the numbers of] social workers have gone down. We’re actually having trouble discharging patients because of that. We’re also not getting any hazard pay for people who are most at risk right now. And you’re asking these people to put their lives at risk,” the doctor added.

How Tourism Sector Will Change After Coronavirus Pandemic?