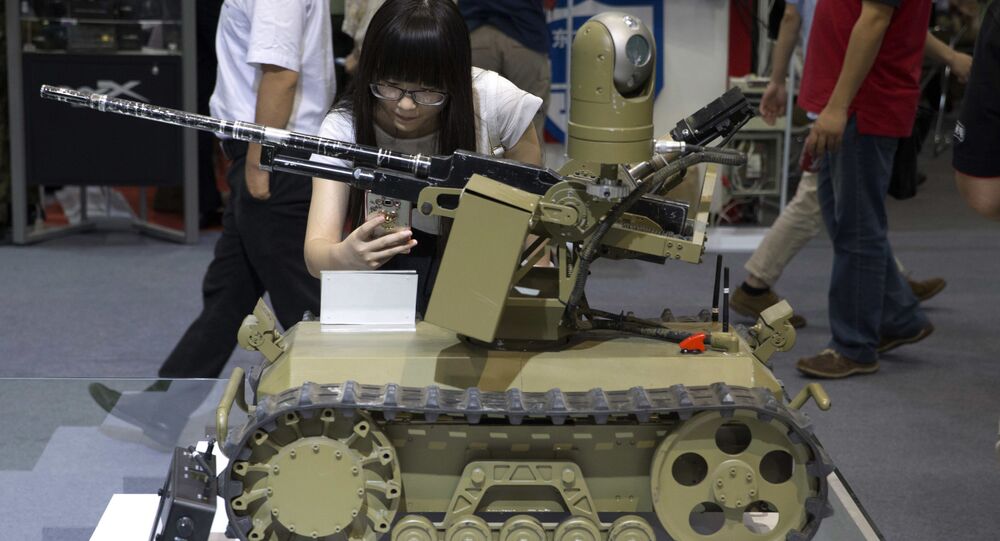 More robot warriors are entering the arsenal of the Chinese military, with the latest additions being a small model that's equipped with a machine gun and a crane-like missile-loading robot, and experts said on Tuesday that robots will free human soldiers from heavy physical work and unnecessary danger.

The Chinese People's Liberation Army (PLA) is in possession of the small ground robot, which can traverse complicated terrains, accurately observe battlefield situations and provide ferocious firepower, the PLA Eastern Theater Command said on Sina Weibo on Monday when reposting a China Central Television (CCTV) report on the robot.

The thigh-high robot looks like a small assault vehicle. It walks on tracks similar to a tank, allowing it to adapt to complicated terrains in open field combat, move quickly and climb stairs, CCTV reported.

Equipped with a machine gun, and observation and detection equipment including night vision devices, the robot can replace a human soldier in dangerous reconnaissance missions, the report said. Target practice results showed the robot has acceptable accuracy, and the use of weapons still requires human control.

The PLA Rocket Force is receiving a large, crane-like robot that can be used in lifting and loading missiles onto transporter erector launchers, enabling more missiles to be launched from the same launcher within short intervals, CCTV reported on Sunday.

A conventional crane is less steady and requires human assistance when loading missiles, but the robot solves this problem, CCTV reported.

Unmanned systems will gradually free human soldiers from heavy physical work and extreme danger and let them focus on making combat decisions and carrying out technical and tactical movements, a military expert who asked not to be identified told the Global Times on Tuesday.

Combat robots may attract more public attention, but support robots like the one the Rocket Force is using are also important to the military's overall combat capability, the expert said.

The article was originally published on the Global Times.